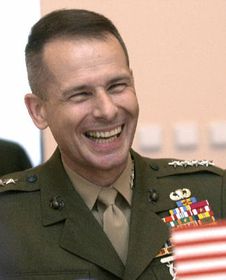 Peter Pace, photo: CTK A senior member of the U.S. military - vice chairman of the Joint Chiefs of Staff General Peter Pace - visited Prague this week, for talks with Czech colleagues that covered Afghanistan, Iraq and reform of the Czech armed forces. General Pace had warm words of praise for his Czech hosts, particularly for the reputation of Czech peace-keeping operations around the world.

"The Czech Republic's leadership in so many peace-keeping operations around the world, like Bosnia, Kosovo and Afghanistan, and now in Iraq, has been extraordinary. Your very special, world-class capabilities in NBC [nuclear, biological and chemical] defence and in medical assistance and in civil military operations has truly made every place that your armed forces have gone much better for their being there."

And the Czech Republic soon takes on a new peace-keeping role: on August 11th four Czech officers will join a NATO command team that takes over the running of the ISAF peace-keeping operation in Afghanistan from the Netherlands and Germany. Jaroslav Kolkus, deputy chief-of-staff of the Czech Armed Forces, explains.

"On August 11th we're joining NATO operations in Afghanistan at a command level. Four Czech officers will join the command structure. At present they're serving in NATO structures, and they are prepared to carry out any tasks submitted to them. We're also ready to supply more officers to join NATO command structures, either to join an existing team or replace other officers." 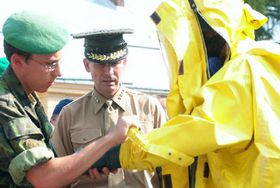 Peter Pace, photo: CTK As far as Iraq is concerned, the U.S. has closed some military bases in Germany - which opposed the war - and has begun talks with countries in Central and Eastern Europe on relocating bases there, as a reward for supporting the U.S.. General Pace was asked whether the issue of setting up new U.S. bases - possibly in the Czech Republic - was discussed during his talks in Prague.

"We did not discuss here during my visit, because it is not an appropriate topic for military officers yet, anything at all about military bases. The decisions about military basing, as always, will be done between nations at the senior leadership of each of those nations. Over time there may be differences of opinion amongst nations about what is right and what should be done at a particular time, but specifically to your question about bases in Germany, we were able to operate completely and freely out of the bases in Germany during our operations in Iraq. So there was nothing there at all in reference to your specific question."

And General Pace later went on to visit Liberec, home of the much-praised anti-chemical unit. There he was shown how members of the unit can withstand up to an hour dressed in full anti-chemical warfare protection suits. The soaring temperatures in this country were not far off what members of the unit currently serving in Kuwait have to endure - who knows when they will once again be called into action.