Czech government negotiations appear to be back on track. The Social Democrats’ party leadership has endorsed the launch of fresh talks with ANO following concessions by the biggest parliamentary party and October election winner. But it’s still far from a done deal. 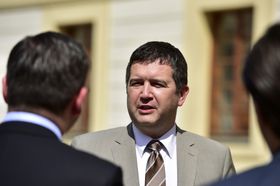 But the leadership’s endorsement was lukewarm at best, reflecting the caution of the centre-left party at getting in the proverbial government bed with Babiš.

In fact, it was just one vote that tipped the balance in favour of restarting negotiations with ANO. Of the 26-strong leadership, 14 were in favour, five against, and seven abstained. Hamáček admitted it was a difficult vote and also described it as one of the most crucial in the party’s recent history.

Many Social Democrats are hesitant about a deal with the ANO leader, who is facing criminal charges for EU subsidy fraud and appeared in archives as a communist era agent. The ANO leader says the criminal case has been fabricated by his enemies and denies being an agent in the 1980s.

ANO made concessions to revive talks with the Social Democrats and, for now, ditch the only real alternative option of dealing with the anti-immigrant, anti-EU Freedom and Direct Democracy party of Tomio Okamura.

Andrej Babiš, photo: Filip Jandourek The most notable retreat was agreeing that the Social Democrats get the Ministry of Interior, which the party sees as crucial to ensure that police investigations into Andrej Babiš or other possible instances of conflict of interest are pursued normally.

And Jan Hamáček says he is seeking an extra guarantee in the coalition agreement:

ʺWe are going to standby the principle that if a member of the government is found guilty in the first court verdict and does not resign, then the whole coalition agreement becomes invalid.ʺ

And although ANO and the Social Democrats previously came to agreement on most policy areas, there are still apparently some outstanding issues there as well as in the share out of posts in the lower house of parliament.

Jiří Zimola is deputy chairman of the Social Democrats and has been one of the lead negotiators. He outlined some of the changes the party is still seeking:

ANO leaders says a full coalition agreement between the parties should be ready within two weeks. 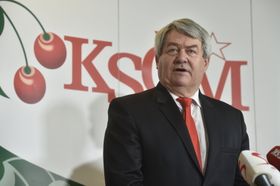 Vojtěch Filip, photo: CTK But it should perhaps be recalled that it’s not just a two way deal that is being put together here. While ANO and the Social Democrats are the main players, the communists literally have a supporting role and their members of parliament are crucial for an overall majority in the lower house of parliament. And as their newly re-elected leader, Vojtěch Filip, pointed out, the communists have their own policy demands as well and are seeking a say on who should be in the new Cabinet having already expressed reservations about some of the current team:

ʺOf course we want to know if these are people who deserve our support and are trustworthy.ʺ

Compensation claims over Czech anti-coronavirus measures rise, along with frustration

Claims for damages due to anti-measures coronavirus are beginning to pile up at government ministries. Nearly two dozen entities are…