Czech airspace to be protected by used supersonic fighters

After last year's floods swept away the government's ambitious plan to buy 24 new Gripen supersonic jets from the British-Swedish consortium BAE-Systems/Saab at a cost of some 50 billion Czech crowns, the future of the protection of Czech airspace became unclear. On Wednesday, however, almost one year after the disastrous floods, the government came up with a proposal. 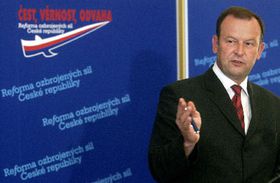 On Wednesday, it finally ruled that as of 2005 Czech airspace should be protected by twelve used supersonic fighter aircraft. They are to replace the ageing fleet of Soviet Migs, whose maintenance is becoming increasingly more difficult and which were involved in a number of crashes over the past few years. The Defence Ministry is planning to approach nine countries, mostly other NATO members, and invite them to put forward their bids. Until the end of November, the government should decide whether to hire, purchase or lease the supersonic jets. Defence Minister Miroslav Kostelka said the army had only limited resources.

"According to our preliminary calculations, we will be able to put aside up to 1.5 billion crowns a year for the planes, including operating costs. Any of the ways of acquiring the aircraft are possible, be it leasing, purchasing, or hiring. The criteria are the price and inter-operability within NATO."

Defence Minister Miroslav Kostelka says the currently-discussed plan is going to be only a temporary solution for the Czech Air Force, adding that it will depend on the state coffers whether the Czech Republic would be able to afford a shiny new fleet of supersonic fighters after 2010.