Hundreds of cameras flashed on Thursday when seven representatives of church and state, including President Václav Klaus, Prime Minister Mirek Topolánek and Prague Archbishop Miloslav Vlk gathered in Prague’s St Vitus cathedral to unlock the chamber in which the Czech crown jewels are stored. The chamber only opens when all seven keepers of the keys unlock seven different locks at the same time. The crown jewels were then taken to Prague Castle’s Vladislav Hall, the traditional site of the coronation of kings, where they will be put on display for the general public for the next eleven days. Photo: CTK Starting on Saturday, Czechs will have a rare chance to see the symbol of Czech statehood and history - the crown jewels, consisting of St. Wenceslas’ crown and the royal orb and sceptre, which are considered to be the country’s most noted cultural treasure. The jewels are kept permanently under lock and key in a reinforced safe and, at the request of the late Charles IV, they are only put on display on very special occasions. This time they were brought out to mark this year’s 90th anniversary of the foundation of Czechoslovakia as well as the re-election of Václav Klaus as the president. They were last displayed five years ago and were exhibited only nine times over the whole 20th century. Conservationist Petr Chotěbor:

“In recent years, they are being displayed every five years on the occasion of the founding of the Czechoslovak republic. In the past they were not displayed that often. Of course visitors who are waiting in the queue wish that it would happen more frequently.” Photo: CTK The crown jewels include the St Wenceslas’ Crown adorned with 20 pearls and 96 precious stones, made for the coronation of Charles IV in 1347. Legend has it that anyone other than the crowns rightful owner who tries it on dies within one year. The Royal Sceptre and Royal Orb were commissioned by Ferdinand I in the years 1532 and 1534. The original ones used in the coronation of Charles IV are now stored in Vienna.

The Prague Castle administration expects around 5,000 visitors every day. Since there is no possibility to reserve a ticket for the exhibition in advance, those who want to see the country’s most precious treasure are expected to wait up to five hours. 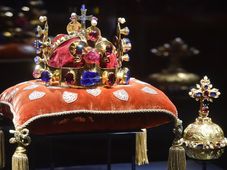 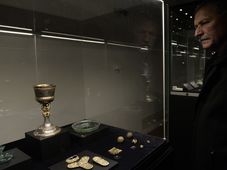 The first part of a major exhibition marking the centenary of the establishment of Czechoslovakia has got underway at Prague Castle.… 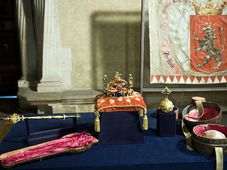