The Czech illustrator and animator Zdeněk Miler has died at the age of 90. The artist was best known for the creation of Krtek (or Little Mole), a cartoon character loved by generations of Czech children that first appeared in the 1950s. Earlier in 2011, a plush toy of the animated character even went to space on one of the last space shuttle flights. 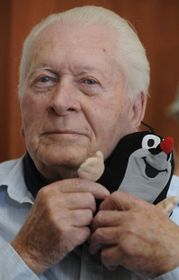 Zdeněk Miler, photo: CTK Without a doubt, many Czechs will be saddened by the loss of the great Czech animator and illustrator Zdeněk Miler, without whom their childhoods would simply not have been the same. For 55 years, Zdenek Miler’s Krtek or Little Mole entertained countess children and their parents in this country and abroad – remaining one of the most loved characters.

The animator first conceived of Krtek in the 1950s in what was originally intended as a one-off project; but the mole captured the hearts of viewers from the start. Jak krtek ke kalhotkám přišel (How the mole got his trousers) was released in 1956 and won a silver lion at the Venice Film Festival. After that, the little creature became the centrepiece of Mr Miler’s work, appearing in more than 50 episodes over the next 40 years.

Interestingly, the character spoke fluently in the first film, but not after: Zdeněk Miler wanted it to be easier for the mole to be understood by all children so speech was soon limited to only short exclamations or simple words – sounds actually recorded by his two young daughters then. To this day the Little Mole communicates mostly through peals of laughter, a few words and gestures. That, says Kateřina Tučková, the curator of a Prague show highlighting Miler’s work earlier this year, is part of the character’s great appeal:

“I think it was the genius of Zdeněk Miler that he found a very simple form or expression which is understandable for children all over the world. Anyone can understand the very sweet and happy figures in his stories that have positive and nice manners. That’s why, I think, the mole and his friends are so famous. We called Mr Miler the ‘Czech Walt Disney’ and this is the importance he has in his animated stories for us and our nation.”

Mr Miler’s Krtek became well-known by kids as near as Germany and as far away as Japan. And this year Krtek enjoyed a new first when he went boldly where no mole has gone before: two plush toy versions spent two weeks in space aboard the Space Shuttle Endeavour alongside US astronaut Andrew Feustel. He toured the Czech Republic in autumn where he and the mole were given a ‘hero’s welcome’. This is how the astronaut at the time described the character’s activities in space. 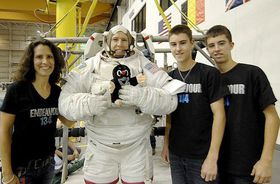 Andrew Feustel “Krtek looked out of the window a lot, he got to brush his teeth, we fed him some food, and he also tried on a space suit.”

Mr Feustel even presented one of the ‘space’ moles to the artist at their meeting in the autumn, with sources saying on Wednesday that for Mr Miler, who was hospitalised in September, meeting the US astronaut was a dream come true. The most famous Czech cartoon character, Krteček, or the Little Mole, has been the centre of legal disputes for some time. Now a court… 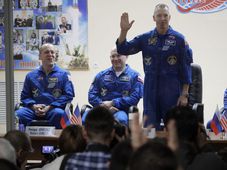 The legendary Czech cartoon character, Krteček, or Little Mole, is heading into space once again. US astronaut Andrew Feustel, who… 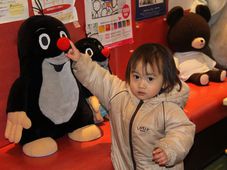 The granddaughter of the artist Zdeněk Miler, author of the famous Czech cartoon character Krteček, can no longer grant licenses for…