November 11th is St Martin’s Day, a day traditionally associated – in the Czech Republic at least – with wine. All over the country people will be popping the corks on bottles of young wine from South Moravia, and the purists will be serving it with the traditional Czech St Martin’s Day feast of roast goose with red and white cabbage. Rob Cameron has been sampling a few glasses, and has this report. 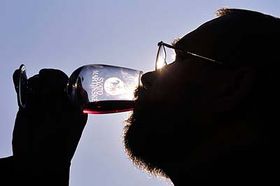 Photo: CTK St Martin began life as Martin of Tours, a Roman soldier garrisoned in France who was baptized as an adult and later became a monk. He is credited with spreading wine-making throughout the French region of Touraine, and is believed to have introduced the Chenin blanc grape to the region, from which most white wines of western Touraine and Anjou are still made to this day.

But what about St Martin’s connection with the Czech Republic? France’s famous Beaujolais Nouveau appears around this time, so you might, like this reporter, be tempted to think that the two share the same origins. Well, you’d be wrong, as Alena Bělovská from the Cellarius Budečská wine cellar explained.

“St Martin’s wine is a great tradition that goes back hundreds of years to the Middle Ages, to the time of Charles IV. Each year, on the feast of St Martin, the wine makers would open their first bottles of wine, which was a very prestigious occasion obviously. So it has nothing in common with Beaujolais Nouveau whatsoever – Beaujolais Nouveau is a tradition going back about 30 years. St Martin’s wine is a tradition that goes back much further, to about 1381.” 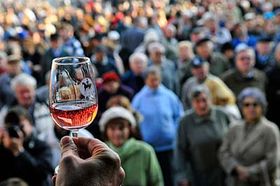 Photo: CTK Charles IV was a great wine-lover – he himself learnt the art of winemaking in Italy and Spain, and brought the tradition back with him to Bohemia. When he became king, winemaking here had been severely neglected; the grapes hadn’t been cultivated for many years. He brought grapevines back with him from all over Europe, and changed the face of Bohemian and Moravian winemaking. So what makes St Martin’s wine so unique? Alena Bělovská again:

“It’s very refreshing wine, very fruity, sometimes almost floral in taste and bouquet. And this wine actually gives us an indication of what that year’s wine will be like, whether it will be a good year or a bad year, whether it will be a pleasant, delicate wine, or whether this year’s won’t be so good.”

So look out for St Martin’s wine in wine cellars throughout the country today. Keep an eye out for labels saying “Svatomartinské víno” – best served with roast goose and cabbage. 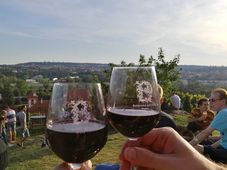 The end of the summer in the Czech Republic brings ‘vinobraní’ festivals celebrating the year’s grape harvest. This picture is from…