Concertino Praga - the future of classical music in Europe

We often hear about who's going to be the next big thing in pop music, but for the world of classical music, the young artists who represent the future often don't receive the same kind of publicity. However, as the international Concertino Praga contest for young musicians reaches its 40th anniversary year, recognition of these rising performers is undoubtedly increasing. The winners of the competition were announced on Tuesday, and Chris Jarrett went along to find out more about the up-and-coming stars of the Czech classical music scene. 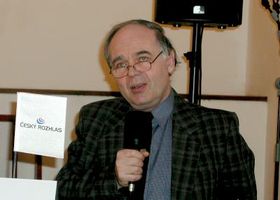 Jiri Hlavac With these haunting refrains the young string duet of Jakub Junek and Ivan Vokac took first prize in this year's annual International Radio Young Musicians Competition, organised by Czech Radio. The Czech ensemble were among 70 promising young performers representing 11 countries from around Europe taking part in this year's Concertino Praga, as the contest reached its landmark 40th year. With Czech television producing a documentary on the history of the competition to mark the anniversary, the head of the jury, Jiri Hlavac explains a little of the origins of the event:

"Its beginnings were really quite impressive. An idea was developed among the editorial staff for children and youngsters at the time to organise a radio competition for young performers which used anonymously recorded and judged entries. The panel of judges listens to an anonymous list of performances and puts them in rank order, with their names held back until this very ceremony. They initiated a contest which has not only lasted for 40 years, but I would say that even today it is unparalleled."

The competition may have been around for a good few years, but it never ceases to produce new and inspiring work, with duets this year including the unconventional blend of the marimba and saxophone. Yet, whatever the instrument or class entered, all participants put much effort into each performance. The winners of the duet class, violinist Jakub Junek and cellist Ivan Vokac, describe their preparation for the event: 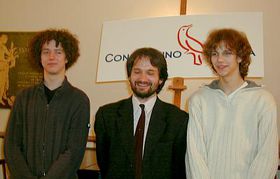 Jakub Junek and Ivan Vokac with their professor (middle) Junek: "We had known in advance that we were performing in the first round, the national round and for that we did around 6 months of long-term preparation. We perfected it and recorded for the national contest and 2 months after had completely forgotten about it! We were called and told we had made it to the international stage and that we had to make a recording within a week, but we hadn't played together for 2 months, since we had our own solo projects."

Vokac: "For the week before the recording for the international round we practically lived together, and that was pretty much our whole day's contact, playing together." 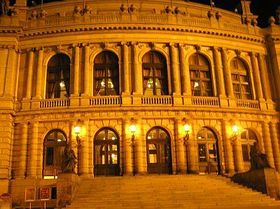 Rudolfinum Junek and Vokac, along with the winning entries in the trio, quartet and quintet classes will be performing on the 17th of April in the Dvorak auditorium of the Rudolfinum in Prague. Helena Hiilivirta, the Finnish representative on the panel of judges, believes that the quality of the winning ensembles reflected the general high standard:

And so, in a world where classical music is seen to be losing popularity, especially amongst the younger generation, the sheer enthusiasm of these talented young artists provides a welcome breath of fresh air. As the Concertino Praga competition grows in prestige year by year, the future of this well established contest looks, and indeed sounds, bright. 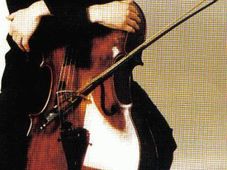 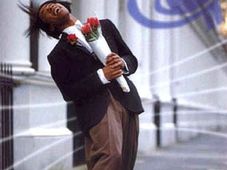 This week, Czech Radio was proud to announce the winner of the 38th International Radio Competition for Young Musicians. Concertino…