Earlier in the week we reported on the trial of the radical socialist David Pecha just underway in the Czech Republic. The 24-year-old editor - charged with propagating communism through inflammatory rhetoric - has been a magnet for controversy, sparking a debate on the freedom of speech. One group that has been steadfast in its show of support, insisting Mr Pecha's trial goes against that freedom, has been the Communist Youth Union. 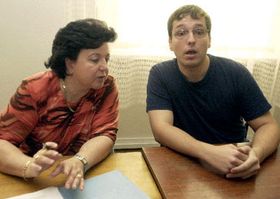 David Pecha, photo: CTK Members of the small but vocal Communist Youth Union have no qualms about throwing support behind David Pecha - the 24-year-old editor charged with propagating communism - they say his explosive rhetoric was meant never meant to be taken literally, his call for 'liquidation of capitalists' merely an expressive term that infringed on no one's rights and freedoms. The head of the Communist Youth Union Zdenek Stefek:

"Our decision to support David Pecha comes from the fact that we believe he is being made an example of, that this whole campaign is politicised and aimed against the communist movement as a whole, regardless of the rhetoric used. I understand that David Pecha's expressions in certain articles can evoke feelings of unease. But, I feel that if someone has to go to trial simply for the rhetoric they use, then something is evidently wrong. What's important here is not rhetoric, but content and context."

Content - if important - led me to ask the youth union chairman how he felt about striking similarities in language used by David Pecha and - for example - illegal supporters of fascism, banned in the Czech Republic. 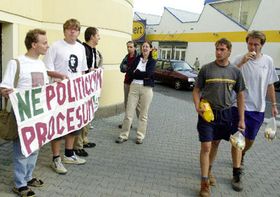 Demonstration against the trial of the radical socialist David Pecha, photo: CTK "A word can have different meanings and interpretations. Liquidation can have several meanings. The difference is that fascism isn't a point of view - it is a crime. Fascism is criminal at its root, whereas communism is a progressive vision of humanity. The fact that it was abused is one thing, but the ideas behind communism are something that would raise humanity to a much higher level than it is now. I don't see anything wrong with it."

Zdenek Stefek did admit that historically communism's track-record had been far from exemplary, though concrete examples of wrong-doings and suffering were not discussed:

"Our motto is 'Neither before 1989, nor before 1938'. We don't want to return to the past. The system, the first attempt at socialism was troubling, with mistakes and deformations. Of course, there were things that are important to condemn, the suffering of unfairly condemned. We have our own saying 'It is wrong when even a single person suffers'."

Which brought me back to David Pecha's incendiary remarks on revolution, all too familiar now; even Zdenek Stefek, far more moderate, indicated the use of force was never far off:

"We don't want the revolution to be bloody - we want it to be realised peacefully. But, history has always shown that whenever a majority of people decided for one ideal it was necessary to defend it, even with arms."

In the end, whether David Pecha's call to arms was meant literally or figuratively, whether it suppressed other people's rights, will have to be decided in court. Unlike fascism, communism as an ideology was never banned in the Czech Republic, in spite of all the suffering it caused. Under such circumstances it would be difficult for even the highest court in the Czech Republic to prosecute David Pecha, even for the most chilling use of terms.