As the Lower House prepared to debate the government's fiscal reform package on Tuesday, a deputy for the ruling Social Democratic Party let off a bombshell. He announced that he was leaving his party's deputies group and might not support the crucial reform package all the way. For a government with a razor thin majority in the Lower House this news could mean the end of the road. 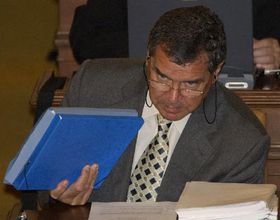 Josef Hojdar, photo: CTK There was not much that could have hoped to overshadow the first day of debate on so crucial a reform package - but Mr. Hojdar's perfectly timed announcement did. For most of the day deputies debated the implications of this unexpected piece of news. Leading Social Democrat deputies held emergency consultations behind the scenes trying to get Mr. Hojdar to change his mind. It was to no avail. Josef Hojdar pronounced his decision irreversible and said it had been triggered by the situation within the party, particularly by poor communication between the government and the deputies' group. "We need more space and a stronger bargaining position" Mr. Hojdar told newsmen.

He has certainly achieved all that. Since the coalition government's future depends on this reform, Mr. Hojdar is now in a position to call the shots. So who is Josef Hojdar and what exactly is he striving for? Political analyst Jiri Pehe:

"Mr. Hojdar belongs to what we could describe as the left fringe of the party, that means that he is not necessarily from the group of people who challenged Mr. Spidla during the election of the President, in other words to people who have close ties with the former prime minister Milos Zeman. Mr. Hojdar seems to be closer to the Communist Party."

So he may be striving for a different prime minister and a different governing coalition altogether?

"I think that if things went Mr. Hojdar's way we would probably have a coalition between the social democrats and the communists. At this point Mr. Hojdar is simply playing a political game and we have to wait for him to tell us what exactly he wants from the Social Democratic Party."

But would it be feasible - even from the point of view of the left-thinking members of the Social Democratic Party - to cooperate openly with the communists at this point in time?

"There is a very strong current in the Social Democratic Party of people who are opposed to the Bohumin Congress resolution, a resolution adopted a few years ago which bans cooperation with the Communist Party on central level, ie. on the national level. This group of people are very eager to create a stable leftist government and they know that a government created with the help of the Communist Party would have a solid majority. It would not have to look over its shoulder all the time nor fear the opposition. That is what these people would like to see and that is why they have decided to launch an attack."

How is the main opposition party of centre right Civic Democrats going to react to all this?

"Certainly the Civic Democrats will have to tread with utmost caution now simply because no matter what the party does it may hurt its interests. If they decide to support the Social Democratic Party, or this government, because -as they will surely put it - because of the need for stability in the country they may start losing their popularity very quickly because they will be seen by the public as being co-responsible for any problems. In case the government collapsed and they were to form a coalition with the Social Democrats or join what is known as a rainbow coalition - a coalition of all democratic parties in Parliament - again the Civic Democrats would pay a high price, their popularity would quickly start to drop. So they have a difficult dilemma. They will most probably not be able to trigger early elections which would be best for them and they will have to be very cautious in supporting either this government or considering a coalition with the Social Democrats in any future government because it may not be advantageous for them."