Thursday marks the end of Charles University's 51st Czech Language Summer School. Over the past month, participants from over 36 countries, from Mexico to Mongolia, have been brushing up on their Czech skills in the nation's capital. Former student Rosie Johnston went back to school to see the progress that they had made: Ana Adamovicova is teaching one of this year's groups of intermediate students. Her class consists of ten budding Czech linguists, from all over the globe. A few of them introduced themselves in their finest Czech:

There are over 190 students taking part in the summer school this year. Jiri Hasil, who is one of the organisers, explains their different reasons for doing so:

"There are various reasons why people participate. Future linguists and writers come here, as well as future historians and political analysts. But they all have their own personal relationship in some way with either Czech culture or the Czech language. It might be that they once read Svejk and want to get to know the language that the book was originally written in, or they might like Czech music. Often participants have some family ties with the Czech Republic, but it can often just be that they have Czech friends."

A lot of the students at the summer school are in the process of learning Czech at a foreign university. But, according to Jiri Hasil again, the classes put on for them here are a world apart from the classes they attend back home:

"There is a difference. Here people learn Czech in a much more intensive way. Participants have 5 hours of classes every morning, all week, from Monday to Friday. They are split into different groups, depending upon their ability. After the morning classes comes the afternoon programme, which is full of cultural activities and designed to teach the students in a different way. These cultural activities extend over the weekend as well, with trips organized to different parts of the Czech Republic."

As the summer school draws to a close, attendance is down in Ana Adamovicova's early-morning grammar class. Still, she insists that this has been one of the best crops in recent years:

"It has been a fantastic year. I really like it when I have students from lots of different countries, indeed lots of different continents. Everyone got on really well with one another this year, and I'm sure we'll all stay in contact even after the summer school is over. We went on trips to various parts of the country together. We've gone on walks, sung songs together, had a lot of fun. But most of all, we have learnt a lot."

The Charles University annual Czech Summer School comes to a close on Thursday, and that will be it for another year. But don't despair: information on next year's programme will soon be posted at http://lsss.ff.cuni.cz. For Slavonic Studies Students, School is in Session

Today marks the midway point for students at the 62nd Summer School of Slavonic Studies in Prague, a month-long program for academics…

Learners of Czech meet in Brno for 50th time 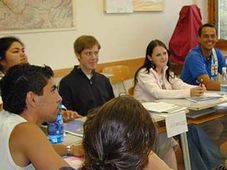