Ron Fletcher is in many ways the archetypal West Coast fitness guru. Following the death of his teacher Joseph Pilates, Fletcher moved to LA where he developed his own version of the Pilates Method. His classes in the 1970s were attended by many of Hollywood’s biggest stars, and his work helped make Pilates the world-wide exercise phenomenon it is today. Now a hale 87, Ron Fletcher is in Prague at the moment for a Pilates conference. When we met, I first asked him about his work with Joseph Pilates, which began in the 1940s.

“When you worked with Joseph Pilates in my day the only place to go was to New York City, on Eighth Avenue in a rickety old building – I’ll never forget it as long as I live.

“He was an interesting man. I have to say at the time I think he was a little bit angry, a little bit resentful that his work hadn’t been recognised more, that it hadn’t been accepted maybe into the medical world, more attention given to it.”

You yourself later did a lot of work to spread the Pilates Method.

“People have to come to you and say I want that, and they have to give you everything they’ve got in order to get it. Then you give it back and then it grows, then it becomes something special.”

How much importance did the involvement of stars like Barbara Streisand have in the spreading of Pilates?

“I think only in terms of all celebrities…everybody’s interested in what they have to say. Barbara, Candice [Bergen], Ali [McGraw]…there were many of them…were wonderful supporters.

“Somebody once said to me, who does your PR? I gave them that list and I said, you couldn’t afford them, you couldn’t buy that kind of PR. It’s because they talked about it.”

They say today something like 11 or 12 million people practice Pilates – why do you think it’s so popular?

“I don’t know why…the media and a lot of so-called teachers have put out claims for it that really are not true. People being people, you know how we are, if they see it printed in the newspaper…and how many women read these what I think are tacky magazines, fitness magazines…and they believe it because that’s what it says in black and white.

“They pass it on and as it goes on instead of getting better the work itself gets sloppier, because there are too many people presenting it who really don’t understand what it’s about.” 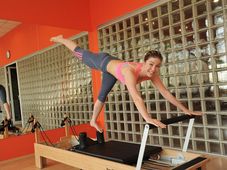 Over the last twenty years many Czechs have drastically changed their lifestyles, eating healthier foods and taking up new sports.…