This year’s World Under-20 Ice Hockey Championship got underway in Pardubice, East Bohemia on Wednesday, with the Czechs hoping for a strong tournament on home turf. Last year they finished a disappointing fifth and fans – who have helped sell out the 10,000+ Cez Arena in Pardubice – are hoping this year they’ll finish at least two better. But it won’t be easy. On Wednesday the Czechs got off to a losing start: despite a strong performance in their opener, they were beaten by three-time defending champions, Canada. The final score was 3:0. 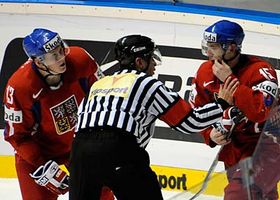 Photo: CTK The loss came despite the Czechs jumping into the match early and playing an even game: in the opening minutes they blasted a number of shots at the Canadians’ netminder Bernier on a 5-on-3 powerplay but failed to capitalise. Then, seven minutes into the first period, Voracek faced the goalie alone. His shot was stopped on Bernier’s pads. In response, Canada’s juniors soon turned up the heat, forcing Czech netminder Neuvirth – afterwards named the game’s second star – to himself come up with a number of big saves. The first period finished scoreless.

It was in the second that the Czechs fell behind. Canada’s Tavares was the first to score halfway in, and Matthew Halischuk doubled the lead early into the third. Tavares then scored again with some seven minutes remaining, which is how it stayed. Despite the lopsided score – and failing to get onto the scoreboard - the Czech junior team’s coach Miloslav Horava was not disappointed with his team’s game, although he made clear the team still needed to play better. 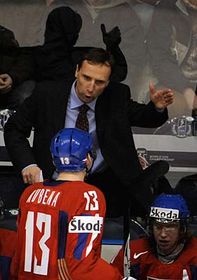 Miloslav Horava, photo: CTK “I think that we can work on a few things and I hope throughout the tournament that our performance will only improve. We played well and had our chances to go into the lead but unfortunately that didn’t happen. It was an excellent game and Canada has a great team, but I think we can improve in the upcoming matches.”

Ice hockey – even at the junior level – is a serious business for Czech fans and they are far from alone: out of the ten thousand in attendance in the Czech-Canada game, one thousand were Canadian supporters in the Czech Republic to cheer their team to what they hope will be a fourth consecutive title. That is still a long way off. The Czechs, who also want a shot, not least before a buoyant home crowd, also have their next matches to consider and will need to rebound and regroup. They next face Denmark on Thursday and later clash with former compatriots Slovakia as well as Sweden.