Activists are holding a protest happening in front of Prague’s Pankrác prison, where Czech artist Roman Týc on Friday afternoon is starting a one-month prison sentence for a 2007 art project that involved defacing fifty traffic lights in Prague by changing the standard red and green figures to show them in situations such as drinking, urinating and hanging themselves. The artist says he chose prison time over paying a fine because otherwise he would be renouncing the project’s message. Titled “Bábovka pro Týce” or “A cake for Týc”, the happening is as tongue-in-cheek as the art project itself – as a sign of their solidarity, participants will bring cakes to the prison, an allusion to the well-known prison cliché of a cake with a file in it. Ahead of the start at 2 p.m., we spoke to co-organizer Magda Vídeňská about the unusual happening. 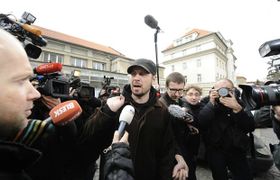 Roman Týc, photo: CTK “In our car, we have the first marble cake or bábovka for Mr. Týc. It is a symbol with which we want to show that we disagree with this punishment. People who share our point of view can come to the Pankrác prison and bring their own cake, to show that they also disagree with the artist’s punishment, the one-month prison sentence.”

Týc himself has said he would not accept a presidential pardon, which some hope for, and that he has to go to prison if he wants to be taken seriously as an artist. Have you talked to the artist about his views on your happening?

“We are in contact with people really close to him but he is not involved in this happening. I think that he likes it, that he understands that people want to express their opinion and that they disagree. But whether he would accept a presidential pardon or not is a question for him, not for us. I think he would probably not accept it but I really am not sure, since we haven’t discussed it.”

There is another dimension to the story – a very recent incident that occurred late on Wednesday night. Allegedly, Mr. Týc attacked a police officer. What is your stance on this?

“We of course are against any kind of violence; I do want to stress that. But we really do not know what happened. People who witnessed the incident say that the story was different. That he was not the attacker but was actually being attacked. But this is another topic. Of course, it happened just days before our happening. We will see how it develops. We do have our reasons to believe that he is not guilty of attacking an officer. 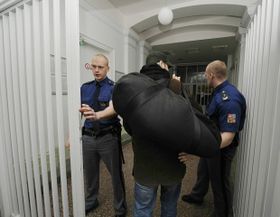 Roman Týc enters the Pankrác prison, photo: CTK In a similar case, the driver Roman Smetana will also serve a prison sentence, for drawing on political campaign posters. Some lawyers have called these sentences too harsh. Do you think the Czech judicial system is misguided in its rulings?

“From what I know, and I don’t know all the facts about that particular case, but I do disagree with such harsh punishments for people who are merely expressing what they think. There are a lot of criminal cases that are far more serious and should be addressed and solved instead of punishing people for expressing their opinion in an artistic or creative way.” In Magazine: a football field cut in half by the Czech-Austrian border, Czech politicians get invites to a session on moral reform,… 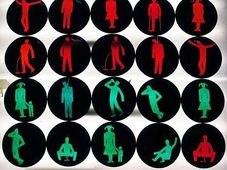 Want to buy a luxury flat in Prague? It could cost you as much as 400 million crowns. Now you can place a bet on whether the US radar…

David Hons, better-known as the Czech artist Roman Týc, was released from Pankrác prison in Prague on Saturday afternoon. He was greeted…