The Czech Cabinet on Wednesday approved a framework agreement for reform, which aims to cut the public finance deficit to four percent of GDP by 2006 - a move that is crucial for the country's future in the European Union. However not everyone is happy with the plan. While the opposition Civic Democrats see it as being too moderate, trade unions have taken to the streets to protest against the spending cuts the plan will entail. 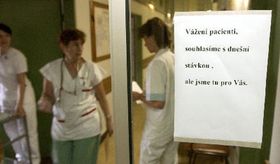 Photo: CTK It has taken the governing coalition many months to reach agreement on the proposed budget reform. The final plan envisages expenditure cuts to the tune of 200 billion crowns and a 70-billion-crown increase in state income, mainly from tax returns. Each of the three parties in the cabinet is said to have made significant concessions, especially on the sensitive question of taxes. Finance Minister Bohuslav Sobotka made it clear on Wednesday that -no matter how strong their protests - trade unions could not pressure the government into making any significant changes. Finance ministry spokesman Jaroslav Dedic:

"At this point there is not much maneuvering space for concessions. This proposal is being considered as final. Of course, there may be talks on such matters as how to curb the shadow economy or some minor things the trade unions would like to see changed, but there can be no question of increased salaries or increased spending in any sphere."

The governing coalition's future depends on this reform -as does the Czech Republic's. Prime Minister Vladimir Spidla has said he will resign if the proposal fails to win approval from Parliament. With a slim one vote majority in the Lower House, pushing it through will be no simple task. So how much maneuvering space does the fragile governing coalition actually have? Political analyst Vaclav Zak:

"I think that from the outset the reform was designed as the minimum of what it was necessary to do. The government really doesn't have any maneuvering space and it must defend its position. We shall see how great the pressure is. Several thousand people in the streets is a normal occurrence in Germany, Austria or France. We shall see the same thing here but I think that the government can survive that pressure. Quite easily."

The government is now under pressure from two sides: from trade unions and from the opposition Civic Democrats which have done very well in the most recent opinion surveys. / If elections were held today they would win 40% of the vote - a landslide victory. / Obviously they are putting pressure on the government in order to weaken it, they may be pushing for early elections at some point. Do you think that pressure -from both sides- is strong enough to topple the government?

Do you think that there is enough cohesion within the governing coalition now to see this reform through ? Because there are commentators who say that what united the government was making it to the EU and now that the Czech Republic is on the threshold of the EU the divisions in Cabinet could be more severe, more visible.

"I think that the internal cohesion is not so bad. Of course the problem is in the club of the Social Democratic Party where there are people who have come from the trade unions sphere and who are sensitive to the mood of the public. So there can be some problems but it is very, very difficult to predict what will happen. If the reform package succeeds they the government will survive, if not there will most probably be a change of government. "