Bozena Nemcova’s Babicka at National Theatre for the first time

Babicka or The Grandmother by Bozena Nemcova is unquestionably one of the icons of Czech literature and, as a regular item on school reading lists, it is known to literally every Czech child. Published in 1855, the book saw more than 350 editions, dozens of theatre productions and several film adaptations. Now, for the first time ever, an adaptation of Babicka has reached the stage of the Czech National Theatre.

In her most famous book, Bozena Nemcova gives an idealized account of her childhood, spent in a rural community at the time of the Austro-Hungarian Empire. The figure she remembers most fondly is her own grandmother, an admirable woman full of generosity and common sense, who selflessly helps people around her.

Given that it was published more than 150 years ago, what can the book bring to modern-day readers? Lenka Kolihova-Havlikova, who adapted the text for theatre, says there are many relevant themes, if only we care to look for them:

“We concentrated on the character of the grandmother. We see her as a woman who struggled for her whole life and who always defended her own opinions. This theme is often hidden behind the idyllic interpretation of the grandmother. Another important theme is the religious life and the joys of everyday life typical for the Biedermeier period. And lastly we discovered the theme of women’s destiny that intersects the whole book. How the world of women is confronted with the male world and the world of politics.”

The great actress Vlasta Chramostova in the leading role of the grandmother says staging of Babicka is a special occasion for her, not only because it’s the last theatre performance of her carrier.

“Babicka has always represented a source of special emotion for me and I always remember Frantisek Halas in this connection. The book has always helped us through difficult times. Babicka supported Halas during the war, she supported me during the period of normalisation and perhaps today, Bozena Nemcova will help us again.”

Although she has read the text countless times, Vlasta Chramostova says that with every reading, she always discovers something new.

“I have suddenly realised that the principle feature of Babicka is her special human force. This is a key to understanding her. My interpretation may be slightly less typical but I don’t think that I am going to break away completely from the common approach. I want to remove some of the pathos because the grandmother was essentially a working woman, very strong and full of wisdom. There is an Arabic proverb saying that eyes that have cried a lot see a lot. I think that applies to the grandmother and to Bozena Nemcova as well.” 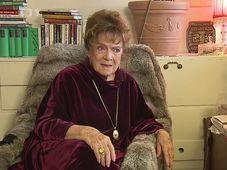 Vlasta Chramostová, a theatre and film actress banned under communism from performing in public, died on Sunday at the age of 92. She…