Half a dozen European bison have been returned to the wild at the Ralsko nature reserve, a former Red Army military training ground about an hour’s drive from Prague. It’s the latest chapter in what is a remarkable reversal of fortunes for Europe’s largest mammal. Hunted virtually to the point of extinction, in recent years they’ve made something of a comeback. 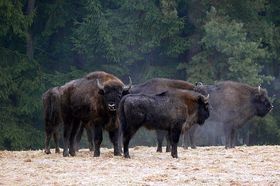 European bisons at the Ralsko nature reserve, photo: Jana Zechmeisterová, archive of the Army of the Czech Republic At the end of a gravel track, deep in the heart of the Ralsko nature reserve, is a large sloping meadow bordered on three sides by a sturdy wooden fence and on the fourth, primeval forest. Standing in the middle of this field is a group of magnificent creatures, their shaggy brown coats and curved horns a sharp contrast to the bright green of the grass. They are European bison, and they haven’t been seen in these parts for 200 years. The man who’s done more than anyone else to bring them back is Jiří Janota, head of the Military Forests and Farmland department of the Czech Defence Ministry, which administers the Ralsko nature reserve. 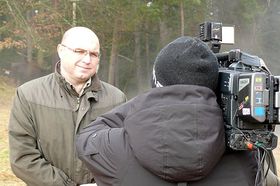 Jiří Janota, photo: Jana Zechmeisterová, archive of the Army of the Czech Republic “It is rather ironic – this was, after all, once a Red Army firing range. But disused army training grounds often boast some of the best-preserved natural environments in the country, because for decades they were closed to the public. Today you’d never know that masses of troops once held their exercises here. In 2000 we built the second largest natural reservation on this spot, and now it’s home to this small herd of bison you can see behind me.” 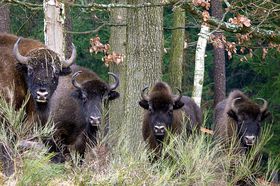 European bisons at the Ralsko nature reserve, photo: Jana Zechmeisterová, archive of the Army of the Czech Republic Six bison – five cows and a bull – were brought here from Poland earlier this year. They seem to like it – the herd has produced two offspring. At present they’re confined to two meadows and a swathe of forest, 16 hectares in total. It’s to acclimatise them before they can be allowed to roam freely through the huge Ralsko reserve, which covers an area of about 250 square kilometres and is open to cyclists and hikers.

European bison were once a common sight in Europe’s forests and grasslands, from Northern France right across to Siberia. By the late middle ages, however, they’d been hunted virtually to extinction, and survived in the wild only in Poland. In 1919, a Polish poacher shot the last one, but ten years later, in 1929, two cows and a bull from zoos in Sweden and Germany were brought to a Polish breeding station, and were protected by both Nazi and the Soviet occupiers. After the war they were reintroduced to the wild at Poland’s Białowieża National Park, and since then they’ve gradually been returned to forests all over Eastern Europe. 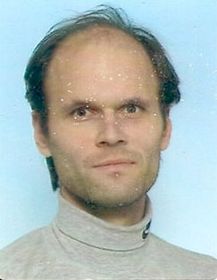 Petr Kvapil But the bison programme is just one part of Ralsko’s recovery from its centuries-old history as a military training ground. Founded by Hapsburg Emperor Joseph II, successive armies – Austro-Hungarian, Czechoslovak, Nazi and finally Soviet - pummelled the rolling hills with artillery and clawed into the ground with tank tracks. A huge dry-cleaning facility where the soldiers’ uniforms were once washed of oil polluted the soil with dangerous chemicals. Petr Kvapil is in charge of a programme that uses nanotechnology to clean the ground water of pollutants.

“This product is carcinogenic. So it’s very dangerous. As it’s an inorganic material, it’s low soluble in water, but enough to be dangerous. As it is low soluble it can contaminate a really huge volume of water, and here at this site we are in one of the most important underground aquifers in the Czech Republic. That’s why we are doing this remediation here.” 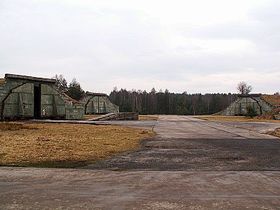 The Hradčany Airport, photo: Archive of MVV Energie CZ At the nearby Hradčany Airport meanwhile, once home to a squadron of Soviet Mig fighter jets, the empty hangers are being used as impromptu sawmills, and the huge runway has hosted both tuning meets and techno festivals. Ralsko has served its military purpose; the Cold War is over, the Russians are gone, and Czechs are slowly reclaiming the land as their own – and indeed donating part of it to one of Europe’s most beautiful mammals. 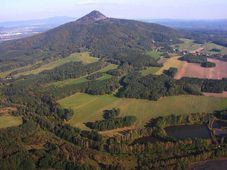 Troops give way to tourists in nature park

A former Red Army military training ground in Ralsko in North Bohemia has been declared the Czech Republic's largest geopark. The area,… 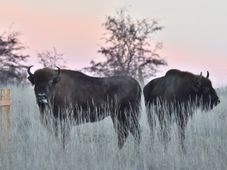 Wild animals contribute to conservation at former military base

The former military base in Milovice, northeast of Prague, is gradually being turned into a patch of wilderness. A herd of 14 wild… 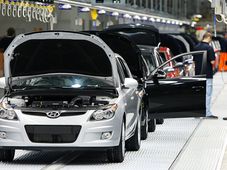