The Roman Catholic bishop of Prague Vaclav Maly has returned from a week-long visit to Belarus, a country whose authoritarian regime is often criticised by human rights campaigners from around the world. Bishop Vaclav Maly, himself a former human rights activist, travelled to Belarus to inspect the human rights situation in the post-Soviet country.

The former anti-communist activist and signatory of the Charter 77 human rights manifesto has not given up his interest in human rights on a global scale. As head of the Justice and Peace Council which as part of the Catholic Church monitors the state of human rights in the Czech Republic and abroad, Bishop Vaclav Maly visited Cuba two months ago, and in July, he travelled to Belarus with the same objective - to find out more about the situation there and inform the public at home.

"The aim of my trip was to find out more about the situation of human rights, the position of churches, civic initiatives, the opposition and also to take a look at the everyday life of Belarusians. Beside the capital city of Minsk I visited a few towns and villages and also the southern part of Belarus which was affected by the Chernobyl catastrophe. Not only did I meet intellectuals and civic activists but I also got to see the life of ordinary citizens in the country."

As a former opposition activist, Vaclav Maly has first-hand experience of repression and persecution in communist Czechoslovakia. He says that it is the freedom of expression which is currently facing the greatest pressure in Belarus.

"Although there are still a few independent national and local newspapers, there is a tendency to abolish those periodicals and create an information blockade and isolation of civic initiatives and oppositions. I'm sorry to say that Mr Lukashenko's administration is quite successful in that. Prominent members of the opposition are harassed in the workplace, they are denounced in official media which discredits them in the eyes of the public. Demonstrations end in clashes with the police and activists are beaten or given large fines which are a great financial burden."

Bishop Vaclav Maly says that the Orthodox Church is favoured by the state and new Belarusian legislation on religious associations is very strict towards new religious movements or Protestantism. Bishop Maly says he thinks developed countries should give Belarus more attention and start by informing about it more thoroughly.

"We get only simplified information about Belarus. We only think in terms of President Lukashenko and Belarus. But life is much more varied there. Firstly, we should remind people that there is such a country as Belarus, what there is, which organisations there are, how people live there. I would like to call on the media to take this territory of Europe into account. That is the first step which naturally influences the thinking of politicians who deal with foreign politics and strategic issues." With the Ice Hockey World Championships beginning in Minsk on Friday, the Czech NGO People in Need has launched a campaign criticising… 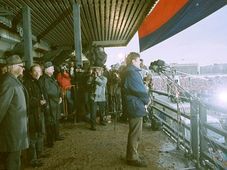 In last week’s From the Archives, we heard Jaroslav Hutka, singing at the huge demonstration that took place in Prague’s Letná park…