That the Wimbledon quarter-final would be difficult for Czech tennis player Tomáš Berdych was pretty much a given, considering he was taking on World No.1 Novak Djokovic. Ahead of the match, the two had met on the court 15 times and only twice had Berdych bested the Serbian player. On Wednesday, he had obvious chances and was arguably in it until the middle of the second set. After that things went downhill fast. 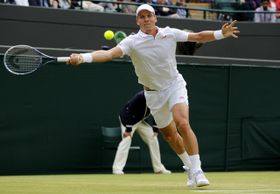 Tomáš Berdych, photo: CTK Tomáš Berdych is a consummate player, No. 6 in the world and seeded seventh at this year’s Wimbledon Championships. But against Djokovic, all too often, things have quickly gone south. On Wednesday Berdych kept pace in a tightly-fought first set before things began to go wrong: he threw away several cheap points including in the tie break, making it easier for Novak Djokovic to take the set.

To lose the first set against the best player in the world is not a fortunate position to be in, yet Berdych upped his game immediately and jumped to a 3:0 lead in the second. Only again it didn’t last. A resurging Djokovic cut the lead to nothing with ruthless precision before getting a stranglehold on the set and eventually the match. As one of the sports commentators on Wimbledon Radio said at the end Djokovic was better “in every respect”.

“Berdych runs and he misses and Novak Djokovic is victorious here at Wimbledon! He excelled in every department today and was able to beat Berdych in straight sets in two hours and fifteen minutes!”

Straight sets but the opposite result – that was the dream for Berdych in the match: to repeat a bit of history from 2010 when the Czech player beat Djokovic three-straight to reach the Wimbledon final – Berdych’s best result in a Grand Slam. He also had reason to be optimistic: he recently defeated the World No. 1 at the Rome Masters. 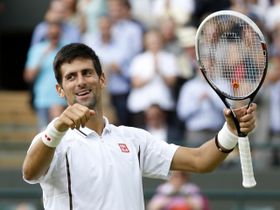 Novak Djokovic, photo: CTK But the dream was swept aside and Berdych was left to think about little else than what had gone wrong. In an interview for Czech Radio, Berdych said he was far happier with this year’s tournament than last (when he made a shock-exit in the first round) but he was not at all satisfied with his performance in the quarter-final match.

“I think there were are a lot of things with my game I can be unhappy about, most of all getting a 3:0 lead in the second set but then letting it slip away. You can’t allow that to happen against a player of Novak’s calibre. Basically, against someone like him you have to give it everything you’ve got. I don’t think I did and he deserved the win.”

Following the departure of Petra Kvitová, also in the quarter-finals, Berdych was the last Czech this year in the singles competition.