Barbora Špotáková satisfied with silver in javelin in Berlin

The Czech Republic has taken its first medal at the World Athletics Championships in Berlin – silver for Barbora Špotáková in the women’s javelin. Much was expected of the defending world champion, but in the end Špotáková says she is satisfied with second place. 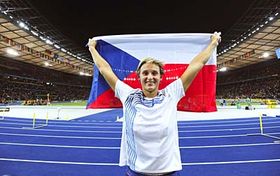 Barbora Špotáková, photo: CTK Barbora Špotáková is probably the greatest contemporary Czech sportswoman. She holds the Olympic gold in the javelin and the women’s world record. Before Tuesday night Špotáková was also world champion, after taking gold in Osaka two years ago.

Going into the current world athletics championships in Berlin she was one of the Czech Republic’s brightest medal hopes, with the country’s sports fans rooting for her to repeat her success of 2007.

However, Špotáková expressed some dissatisfaction after her showing in qualification for the javelin final in Berlin. She complained of tiredness and was undergoing treatment for a problem with her elbow on the eve of the big event.

In the end, a throw of 66.42 metres was 88 centimetres short of the best effort by Germany’s Steffi Nerius, and the Czech had to settle for silver. She spoke to Czech Television soon after Tuesday’s final. Barbora Špotáková, photo: CTK “I did throw poorly. It was particularly painful during my final throw when I really put everything into it – but that throw went up into the skies, instead of going straight! It was a big pity, but my elbow will be fine.”

Despite missing out on gold, Špotáková said she was satisfied overall with second place. She told reporters she had been sad for all of three seconds, and joked that being beaten by home favourite Nerius – who was taking part in the last event of her career – increased the level of happiness at Berlin’s Olympic Stadium.

“Every medal at a world championships is wonderful, so I’m as happy as I possibly could be. The competition didn’t go exactly as I thought it would, but that’s the nicest thing about sport – it’s different every time. You can’t make predictions at all!”

The next big challenge for Barbora Špotáková will be the 2010 European Championships in Barcelona, where she will have the opportunity to win the only major competition that has eluded her and complete a remarkable collection of medals. 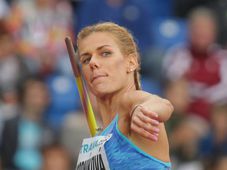