On Monday, officials announced that Czech archaeologists had made a remarkable discovery at Abusir, near Cairo, unearthing parts of a wooden boat more than 4,000 years old. Its location near the tomb of a prominent noble is a unique find. Such vessels, used by the spirit of the deceased to navigate the underworld, were usually reserved for members of the royal family. 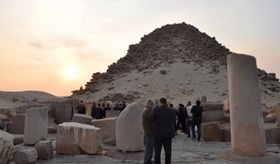 Abusir, photo: CTK Czech archaeologists have conducted work in Egypt for more than 50 years, making numerous significant discoveries in the area of Abusir, an extensive necropolis from the Old Kingdom, located south of Cairo. The most recent, and one of the most remarkable, was announced by the authorities this Monday, coinciding with a visit by Czech Foreign Minister Lubomír Zaorálek. Found were parts of an 18-metre long wooden boat more than 4,500 years old. The vessel was uncovered under the sand and on a bed of stones within the burial complex. Egyptian Antiquities Minister Mamdouh Al-Damaty:

“It is a wooden boat found near a noble’s tomb – not a royal one. It is the first time something like this has been found by a noble’s tomb.”

Miroslav Bárta, the head of the Czech archaeological mission in Egypt, emphasized the significance of the discovery, also confirming that boats of similar size and construction during the Third or Fourth Dynasty were usually reserved for members of the royal family. It indicated the high standing of the noble person, in life and in death. Miroslav Bárta:

“The boat was found near a tomb that more or less originated in the era of the famous builder of a terraced pyramid and ruler, the Pharaoh Djoser. [The vessel] dates back to the creation of the first stone complex here. Its placement near the noble’s tomb has the makings of a proper historic mystery.” 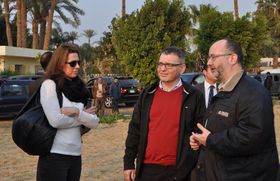 Lubomír Zaorálek, Miroslav Bárta, photo: CTK It is hoped that the careful excavation and preservation of the vessel will provide new insight into boat construction in ancient Egypt as well as to their importance as funerary items. Experts will also now try and find out whom the boat belonged. On Monday, Foreign Minister Zaorálek said he had invited Mamdouh al-Damaty to Prague. The capital is to open a significant Egyptology exhibition in 2019 in which it is to present up to 150 artefacts. 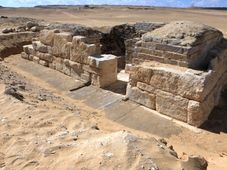 Czech archeologists have chalked up a new remarkable discovery at Abusir, southwest of Cairo: the tomb of a previously unknown queen.…