The find of the century is what Czech archaeologists are calling the discovery of a 7000 year-old statue in Masovice, a village just west of Znojmo, South Moravia. Although only the lower parts of the sculpture have been found, experts say that Hedvika, as the statue has been named by those who discovered it, is a unique find in a European context. 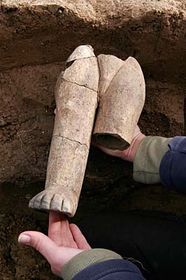 Photo: CTK On Wednesday, experts from the Brno Archaeological Institute marked a discovery that could change the way historians look at the era of 7 000 years ago, known as the Neolithic Age. During an emergency survey on a building site in the community of Masovice, some 8 km north of Znojmo in South Moravia, they discovered fragments of a ceramic female sculpture. Archaeologist Zdenek Cizmar, who was the first to lay his hands on this unusual find, explains the significance of the discovery.

"The sculpture is unique for two reasons; one of them is its size. The fragment we have found is 30 centimetres tall, from its feet to the waistline. We therefore estimate its overall original height to be 55 to 60 centimetres; this means that it is the largest statue of the Moravian Painted Ware culture ever found in the whole Middle Danube Basin". Zdenek Cizmar, photo: CTK The people of the Moravian Painted Ware culture formed a part of the Neolithic civilization of central Europe in the period between 5000 and 4000 BC and they were particularly distinguished for their pottery skills. Many other figurines have been found in sites across Moravia, Slovakia, Hungary and Austria, but the recently discovered statue is different in yet another way - it is hollow. As Zdenek Cizmar says, archaeologists are still not quite sure why.

"We have two possible explanations. It could either be some sort of a technological issue to make sure the statue was easier to dry and burn. It is also possible that the sculpture, which surely served some ritual purposes, could also be used as a vessel to pour liquid from during ritual ceremonies."

Following an unwritten rule of their profession, archaeologists from the Brno institute gave the statue the name of Hedvika, as Wednesday was Hedvika's holiday in the Czech Republic. Now the experts are hoping to find the rest of the figurine in remaining parts of the survey zone that are yet waiting to be uncovered and explored. The fragments of Hedvika are currently being studied by scholars from the Brno Archaeological Institute but they promise that next year, it will be displayed at the South Moravian Museum in Znojmo.