Anniversary of Communist Takeover in February 1948

Almost three years after the end of World War 2, on the 25th of February 1948, the Communist Party seized power in Czechoslovakia. What followed was forty years of hard-line authoritarian rule and the Czechoslovak calendar remembered the date as "Victorious February". Pavla Horakova looks back at the day which changed the life of this country for so many years. 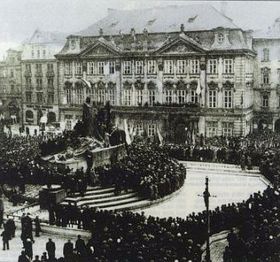 February 1948 in Prague The 1946 general elections in Czechoslovakia ended in a landslide victory for a Communist Party that enjoyed strong support among the public. Based on the results of these elections, a new government headed by the Communist leader Klement Gottwald was formed. The 1948 communist takeover is often referred to as a 'coup d'etat'. But in fact, the communists managed to install their new regime in accordance with the 1920 Czechoslovak Constitution. Vladimir Nalevka, a history lecturer from Charles University explains.

"It was not a coup d'etat in the traditional sense. It was a legitimate change of power, but in its consequences, it was a change of the quality of the political system. It concluded the period of political plurality and introduced the political monopoly of the Communist Party."

After the end of World War 2, the party had a strong backing in the country due to pre-war traditions and also thanks to the role of the Soviet army in liberating most of Czechoslovakia. After the 1946 elections, the communists started introducing various changes and, under Soviet leadership, planned a full takeover. Vladimir Nalevka again.

"Frankly, the communists enjoyed strong public support. People were disappointed by the traditional democracy, they were disappointed by what the Western powers had done in Munich 1938. The communists could therefore count on the public. They had won its support by their previous actions, for example the displacement of Sudeten Germans, the agricultural reform, or the nationalisation process. There were a lot of illusions then and people gradually sobered up in the following years, but in 1948, the people in the squares who expressed their support of the Communist Party came there on their own will and most of them sincerely supported the Party."

There were several factors that contributed to the success of the communist takeover. One of them may have been the weakness of Czechoslovak non-communist politicians, including President Benes, and the general climate in the country favourable to the communists. But the geopolitical situation of Czechoslovakia was perhaps more important, following the Yalta conference where Roosevelt, Stalin and Churchill agreed that the country would come under the Soviet "sphere of influence". Historian Vladimir Nalevka.

"We now know for certain that Stalin's armed units were waiting in Hungary and Austria. They were ready to intervene in 1948 and make sure that the development in Czechoslovakia is under Moscow's control and that the Soviets could count on Czechoslovakia as part of its empire."