The Region of South Moravia is notably rich in archaeological sites, having been home to Celtic, Germanic and other tribes before the coming of the Slavs. One of the places that has been yielding more information about those peoples is the area around Pasohlávky, on the Dyje River. Archaeologists have spent years there studying the remains of a military camp built by Roman invaders in what was then the domain of the Germanic Marcomanni. This week, the scientific team working at the site announced the discovery of a wealth of objects that cast more light on a shadowy period. 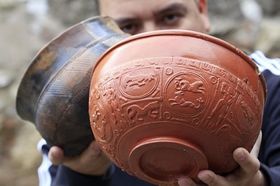 Photo: CTK The ground at Pasohlávky has been giving up archaeological riches since the 1980s, telling the tale of the Roman campaigns under the philosopher-king Marcus Aurelius to conquer the barbarian tribes that inhabited the forests north of the Danube. Last year a military field hospital was discovered, and before that baths were found; essentially each year of excavation brings researchers closer to a more vivid image of what the 2nd century looked like here.

The latest trove was found in a water well pertaining to a community of Germanic Marcomanni - literally “frontiersmen” – living next to a military camp of the Roman Tenth Legion. It consists of amber, a testament to the lucrative position along the ancient trading route the Amber Road, exquisitely crafted Roman pottery and well-produced armour, and numerous bronze brooches. Most importantly however is the message the items leave about the relationship between the invading Romans and a subjugated people, as Marek Vlach of the Institute of Archaeology in Brno explained to me. 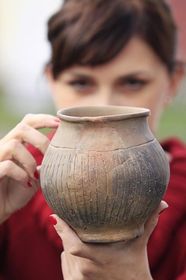 Photo: CTK “Perhaps there was a kind of symbiotic relationship; the Romans may have passed on some technologies or encourage certain activities in the settlement (a workshop for the production of brooches, which is also very unique, was also found in Pasohlávky) and it seems that these local Germans were collaborating with this Roman occupying power. This kind of relationship between a Germanic tribe and the Roman military power has not been excavated anywhere else in Moravia so far”.

The discoveries are pointing to a long, incremental process of the Germanic tribe coming to cooperate with the Roman invaders and benefit from their presence. The community at Pasohlávky was one of the largest Marcomanni settlements in Morava and through their lively collaboration with the enemy they also became one of the wealthiest. Between that fact and the huge campaign against them, there is doubtless much more in Pasohlávky that is still to be discovered. 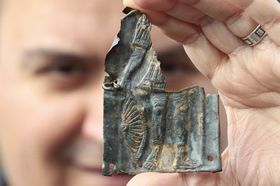 Photo: CTK “According to written sources from antique times, there were some 20,000 soldiers on this campaign, so we expect many more findings of this kind”.

The digging cannot go on indefinitely with the construction of a luxury spa centre underway, but archaeologists intend for the entire area to be examined with the help of large grants and for the military camp itself to be preserved as an archaeological park in time. 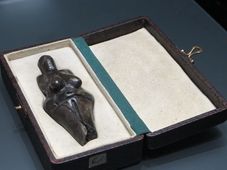