An unexpected find at the US embassy in Prague

A late spring cleaning session at the US embassy in Prague has led to a find that has surprised and pleased Czech historians: a box of documents relating to the political processes in the hardline 1950's. Czech archivists believed that they'd been shredded years ago. 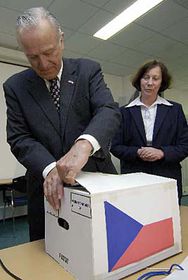 US ambassador William Cabaniss opens a box with archive documents, photo: CTK The box, which the US ambassador William Cabaniss himself delivered to the Czech National Archive, contains some three hundred documents, all marked with red, signifying that they were connected with political trials. The files are now being studied by historians and will almost certainly help to shed light on the bleak years of Stalinism in Czechoslovakia. Dr. Katerina Kotikova of the Czech National Archive says that unexpected finds such as this are what make the work of an archivist exciting.

"When you think that someone, some unknown person had this box in their keeping and probably sometime in the seventies before emigrating decided to take it to the US embassy where it would be kept safe for future generations - it is quite awesome. It was probably placed in a safe and spent the next thirty or so years waiting to be brought out into the open. It is really interesting the way that some archive materials are preserved and found."

The 300 or so files will now bear testimony to one of the darkest chapters of Czech history. It is not yet clear what personal tragedies they contain, but the Bureau for Investigation of the Crimes of Communism will certainly be interested in seeing them.