Altay mountain to be named after fictitious Czech character

Prague's Jara Cimrman Theatre, named after a popular fictitious character, is about to become involved in an unusual undertaking. It has put together a group of actors and professional climbers who will visit Russia's Altay Mountains this summer. When they get there they plan to christen a hitherto name-less peak - after Jara Cimrman.

Jara Cimrman is a famous and very popular made-up figure, who, according to his creators Zdenek Sverak and Ladislav Smoljak, was active mainly at the turn of the 20th century. He would have been credited with many successes, such as the invention of the light bulb or the conquest of the North Pole, if he, for some reason, hadn't been just a few minutes late to come to the patent office, or hadn't missed the pole by 7 metres when fleeing from a local tribe.

The expedition to the Altay Mountains should be financed with the help of a public collection, which starts on March 1. The Jara Cimrman Theatre issued special certificates worth 200 - 10 000 crowns, which can be purchased via the Internet, at some branches of the Czech post office, or at the theatre itself.

In case some surplus money is gathered, there is an agreement between the theatre and the Charter 77 Foundation that a home for old or sick artists who find themselves in difficult circumstances should be built and paid for with this money. The home should be called 'The Home of the Four Muses' which is a name reminiscent of the four performing arts. Evzen Hart from the Charter 77 Foundation told us how far they got with this plan:

"This project is at its very beginning. The first task is to gather enough money, so that we could start preparing the project. And then we would like to address the authorities to help us, either by providing us with a construction site or by giving us some kind of building that would be suitable for rebuilding."

The Foundation started collecting money already two years ago, and so far it has gathered about 170 000 crowns (8000 US dollars). It hopes to gain more publicity by joining the Cimrman expedition.

The expedition to the Republic of Altay will include one of the 'inventors' of Cimrman, Ladislav Smoljak. His colleague, Zdenek Sverak said he liked his weekend-house better that Siberia and wouldn't take part in the expedition. The mountain in question is 3610 metres high and Cimrman is said to have been in the area in 1907, when he was on his way home from the Russian-Japanese War. Mr Sverak confirmed that it had always been Cimrman's dream to have a mountain named after him.

If all goes well and the Altay Parliament approves of the new name, it should be charted on maps by 2009. You can find more about the expedition at www.altajcimrman.cz. 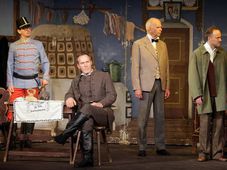