Free tests of alcohol by the Health Ministry at the end of last year revealed that every eighth bottle of spirits out of more than 7,000 checked brought in by households contained dangerous substances – 40 of them lethal amounts of methyl alcohol. The results were announced by the chief hygiene officer on Thursday, roughly half a year since a major poisoning outbreak in the Czech Republic. 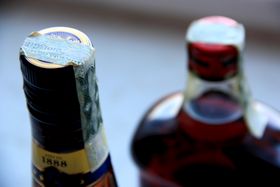 Photo: Barbora Kmentová The results announced by Chief Hygiene Officer Vladimír Valenta are a sombre reminder that last year’s methanol outbreak which claimed 42 lives and put 124 others in hospital, is still a threat. Out of 7,000 bottles, 40 at the end of December were found to contain lethal levels of methyl where as little as one drink could be fatal. Alena, an 58-year-old who spoke to public broadcaster Czech TV, spent 12 days in hospital last year and was lucky to survive after having drunk laced rum: her eyesight was damaged, her husband, who was drinking with her, went blind.

“My husband drove for a living so he can no longer do that. We will have to sort it out with him going on a disability pension.”

Free tests offered by the Health Ministry at the end of the year were meant to prevent similar misfortune or tragedy and the findings are a warning that many households that still have older bottles of spirits in the pantry should consider having them tested or just pour their contents down the drain. The service, however, is no longer free and costs more than a new bottle with proper certification. The danger, it turns out, is not only from methanol, but also from another substance, isopropyl alcohol, found in a full 800 bottles. While not as toxic, it too can have adverse health effects, even leading to coma. Chief Hygiene Officer Vladimír Valenta: 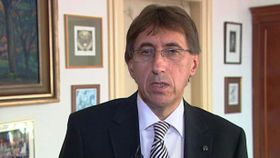 Vladimír Valenta, photo: Czech Television “The presence of the substance reveals that bootlegging is not uncommon. Unfortunately, this substance can have adverse effects on health quite similar to methyl.”

The highest number of tainted bottles came from Moravia-Silesia, the “epicentre” of last year’s methanol crisis which saw the majority of methanol-related deaths. Currently ministries are preparing a number of changes to prevent a similar tragedy from happening again, including a permanent ban, for example, on the sale of hard liquor by curb-side stand owners. If implemented, the ban will also disallow the sale of liquor stronger than 15 percent at holiday markets and other restrictions are also being considered. Meanwhile, 70 people in last year’s methanol case are charged for their involvement in the illegal production chain. The main suspects, if found guilty, face between 12 to 20 years in jail.