From March 1, the on-farm slaughter of crocodiles – and the processing of crocodile meat for sale to consumers – will be allowed in the Czech Republic. The Agriculture Ministry approved the regulation change following consultation with Brussels when it became apparent that a crocodile farm in southern Moravia housing more than 200 specimens had no legal way of culling its crocs. Photo: Pavel Kudrna As of March 1, innovative chefs at exotic restaurants will be able to consider adding Czech-bred crocodile to their menus thanks to an amendment issued by the Agriculture Ministry. The step was taken by the ministry after Agro Jevišovice, a farm in southern Moravia, began breeding Nile crocs as a tourist attraction but apparently didn’t think the business through to its logical conclusion. Crocs at the farm, originally bought from operators in France and Thailand, multiplied, and today number more than 200; that prompted officials to act. Analyst and agriculture specialist Petr Havel told Czech Radio how the situation came about:

“The by-law, consulted with Brussels, was adopted in order to deal with the situation at Agro Jevišovice. It was a situation where the crocodiles were reproducing but there was no legal framework for their slaughter... Agro Jevišovice used to be a large agricultural firm that in the past invested in all kinds of projects, including experimental ones. It was all a bit gung ho. Several years ago they brought in the crocodiles as a tourist attraction. When they began reproducing there was no way of dealing with it.”

The amendment issued by the Agriculture Ministry allows not only the culling of the exotic animals, of course using humane methods, but also allows for the processing and sale of crocodile meat overseen and guaranteed by the State Veterinary Administration. Crocodile meat, said to be low in fat and high in protein, could be a welcome change in diet for some restaurant-goers; at least one online cooking guide describes the meat as succulent and ideal for marinades or sauces. But are crocodile dishes at Czech restaurants really likely to take off even though the possibility now exists? Agriculture specialist Petr Havel again:

“I have to say I don’t think that it is at all about whether crocodile meat will be provided to restaurants although some restaurants may take up the offer. It was really about dealing with a situation that was foreseen by no one.”

While crocodile steak may not end up on anyone’s plate anytime soon, this much at least is clear: the days of at least some of the Nile crocs in southern Moravia, come March 1, are numbered. 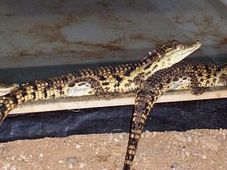 Crocodiles and snails being reared on Czech farms

Crocodiles are no longer something you need to go to the zoo to see here in the Czech Republic. Several Czech farmers have started…

The zoo in Plzeň on Friday announced the birth of 21 dwarf or broad-snouted crocodiles. The zoo has been successfully breeding the…