Fifty eight years ago on May 5, 1945, Czechoslovak Radio called on citizens to rise up against the Nazi occupying force. With this the Prague Uprising began, and for five days Czechs took up arms against the German troops until the Red Army arrived in the Czech capital on May 9. This, the end of the Second World War, is being commemorated around the Czech Republic on Monday. 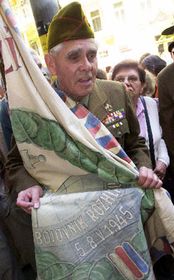 Photo: CTK Next to the entrance of the Czech Radio building on Vinohradska Street in Prague, a plaque reads "5 May 1945, 12.33, Calling on all Czechs, The signal for the Czech National Uprising." The plaque commemorates a broadcast during which Czechoslovak Radio called upon citizens to rise up against the Nazi occupying force. The uprising was organised by the Czech resistance, and around thirty thousand people joined it in the Czech capital.

One day later, on May 6, another message was broadcast from the Czechoslovak Radio building calling for help from American and Russian forces. The Prague Uprising soon became a fight for the radio station itself, and one of the toughest battles of those days took place here.

Almost 1,700 Czechs lost their lives during the uprising, along with 300 Soviet deserters and 30 Red Army soldiers, while German casualties numbered around 1,000. On May 8 the Germans surrendered to the Czechs, just one day before the Red Army entered Prague. 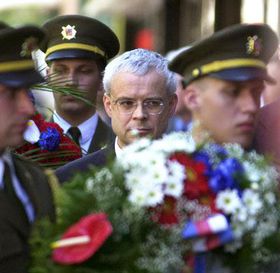 Prime Minister Vladimir Spidla, photo: CTK In honour of Czechoslovak Radio's major role in the events of May 1945, today's Czech Radio building figures prominently in the ceremonies marking the Prague Uprising. On Monday afternoon Prime Minister Vladimir Spidla joined representatives of the Czech Freedom Fighters Union in front of the building to commemorate the anniversary.

Places all over the Czech Republic are also honouring their citizens who lost their lives in the liberation of the Czech capital. Andela Dvorakova from the Czech Freedom Fighters Union tells us how the central Bohemian town of Horovice is marking the anniversary: