33 years since the Soviet-led occupation of Czechoslovakia 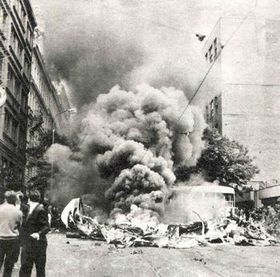 Tanks in front of Czechoslovak Radio, August 1968 Wreaths were laid by the plaque on the Radio building, commemorating the events 33 years ago.

When Soviet planes bringing in tanks and soldiers started landing at Prague's Ruzyne airport around 2 am on August 21, 1968, Czechoslovak radio was the first to announce the event. In the early morning hours tens of thousands of people started gathering in front of the building to protect the Radio, the last and only source of information and moral support. The occupation forces, too, realized the significance of Radio and at 7:25 am Prague Radio announced that a column of tanks was approaching the Radio building at Vinohradska 12 and 10 minutes later listeners could already hear the shooting above the voices of the announcers. 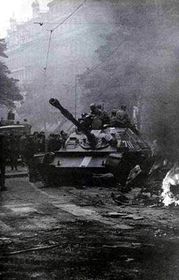 As the Russian soldiers finally did manage to penetrate the building, the technician started broadcasting the national anthem, as a last token to freedom.

There was massive shooting in front of the Radio building. The director of Czech Radio, says Vaclav Kasik:

"Till this day, whenever I look out of the window of my office, I see the marks on the facade of the building across the streets. Those holes were left behind by the shooting on August 21st 1968. It's a reminder of the role played by Czechoslovak Radio, something we cannot forget."

At 12:30 on August 21st, 1968 Radio Prague announced that 25 people had been killed in the shooting on Vinohradska street. These were unarmed civilians, who had only come to protect the building. When the building was finally taken over, free broadcasting did continue, thanks to the technicians who managed to find other places from which to secretly broadcast. 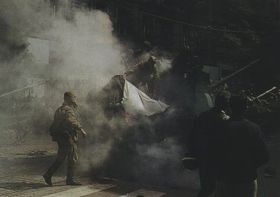 Soviet invasion of Prague, 1968 Now, 33 years later, there are still numerous discussions as to whether the Prague Spring was a feasible project in the first place. At the time, Czechoslovakia was very much a part of the Eastern block, with the silent consent of the West. A fact proved by the international silence that followed the August invasion. But whatever the current evaluations, it was one of the most heroic periods in our history and we here at Radio Prague are proud of the role Czechoslovak Radio played in those events.