25 years ago today, the dissident playwright Václav Havel became the first non-communist president of Czechoslovakia since 1948. Back then, Edvard Beneš had resigned from office in the midst of a communist putsch led by Klement Gottwald. 41 years later, the communists would vote to destroy their own monopoly on power. 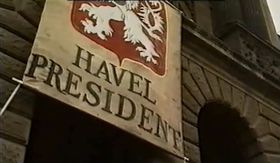 Photo: ČT In something of an ironic final twist to the Velvet Revolution, it was the communist deputies of the rubber-stamp Czechoslovak Federal Assembly who unanimously voted for Václav Havel to become President of Czechoslovakia on December 29, 1989. The tumultuous days of the Velvet Revolution had led to the resignation of not only the communist party leadership, but also of president Gustav Husák. Marián Čalfa, a reformist communist, then headed a so-called “government of national unity”. It was he who ultimately saw no other option than for Havel to be elected president. He ultimately convinced his colleagues to fall in line and essentially vote to dismantle the one-party state. Here is Václav Havel reciting the Presidential Oath on the same day: 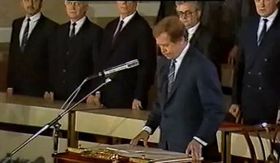 Václav Havel on December 29, 1989, photo: ČT “I promise, on my honour and conscience, to be faithful to the Czechoslovak Socialist Republic. I will work for the well-being of the nation, and the nationalities that live therein. I will carry out my functions according to the will of the people, and in the interests of the people, and to preserve the constitution and other laws.”

The original oath had read “to be faithful to the Czechoslovak Socialist Republic and to matters of socialism.” It was hurriedly altered. Nonetheless, Havel faced the curious situation of having been elected by a communist body to serve as president of a Czechoslovak Socialist Republic. It would take several years for this particular tangle to be undone. In 1990, Václav Havel was again elected as president of the newly renamed Czech and Slovak Federal Republic – but only for a two-year term. Two years later, in 1992, multiple rounds of presidential elections – again voted-on by parliament – merely served to run out the clock on the very existence of Czechoslovakia. On February 2, 1993, Václav Havel recited the oath and became President of the Czech Republic. 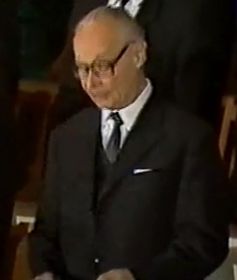 Alexander Dubček, photo: ČT But back in 1989, Havel was a reluctant president. Much of the Czechoslovak public had wanted to see Alexander Dubček, the reformist party leader ousted after the Soviet-led invasion of 1968, to return to his “rightful place”. Instead, Dubček was given a consolation prize a day earlier, on December 28, and became speaker of the Federal Assembly.

Following his taking the oath, Václav Havel went to Prague Castle and conducted an inspection of the Presidential Guard. He then addressed the public from a balcony at the Castle:

“Dear friends. Not long ago, I was unanimously elected by the Federal Assembly to be the president of our republic. I thank all of you for your support. I promise not to betray the faith you have placed in me, and I pledge to lead this country towards free elections.” 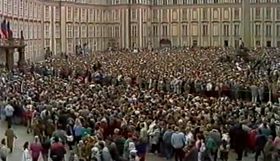 Photo: ČT At this point, the crowd erupted in cheers. Havel went on:

“These have to take place in a clean and peaceful manner so as to not dirty the clean face of our revolution. That is a goal for all of us. I thank you!”

The crowds cheered “long live the president”. Václav Havel responded with a V-sign. It was a euphoric day, which those who were there to witness it will likely never forget.