The Velvet Revolution which toppled the communist regime in then Czechoslovakia began on November 17, 1989 with a student protest at Prague’s Národní třída. But a full week earlier, unrest was brewing in the northern Czech city of Teplice over poor air quality. Finally, one young student decided enough was enough. 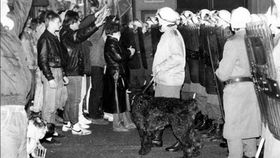 Protest against suffocating air quality in Teplice in 1989, photo: Czech Television The fact that the communist regimes of Eastern Europe had little respect for the environment is well known. But what is not as well known is that the effects of this production-at-all-costs mentality played a role in bringing down the communist regime in Czechoslovakia. At the time, Teplice was a small industrial town in northern Bohemia full of coal plants and other factories. Come autumn, sulphur from these plants, combined with primitive home heating and a weather phenomenon known as an inversion, which pushes emissions down to ground level, made the air almost unbreathable.

A young student called Zbyšek Jindra, later nicknamed “Oněgin”, who sadly passed away in 1996, decided it was time for people to act. In a 2009 interview with Czech Television, his mother Anna Jindrová remembered the events of November 1989:

“It was because of the air quality. My daughter was ill, and Zbyšek had a good relationship with his sister. She had caught pneumonia two times over two years, and she was unable to eat and was very ill. And when the demonstrations broke out over this poor air, she went there too – arm in a sling that the doctor gave her to reduce bleeding; eczema on her body. And her brother was highly motivated by this.”

Zbyšek’s friend David Krčmář described how the protests were planned as far back as October:

“I think that one of his motivations was that, like me, he didn’t like communists. Some time around the end of October 1989, he came to me with an idea that it would be good to do something about the environment here – specifically the air quality. And his idea was to undertake some kind of demonstration over this issue. And so we put together a text that I typed out on a typewriter.” 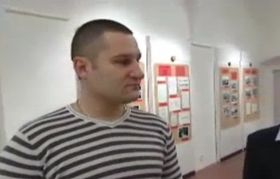 David Krčmář, photo: Czech Television From November 8, “Oněgin” and David set about rallying the young citizens of Teplice to join in a protest against the suffocating air quality the following Saturday. Posters went up, but many were quickly torn down again by the police, who interrogated Jindra over his actions, but evidently failed to dissuade him. In Teplice, this issue had already led to grassroots civic engagements such as debates and documentary screenings. The communists were apparently caught off guard as these then morphed into genuine political protests. Anna Jindrová remembered:

“He was probably afraid I would talk him out of it. So he showed me the poster. I knew about the demonstration, and I even attended it. But he didn’t tell me he was the author of the poster or the initiator of the protests. Only when I saw him at the front of the group of protesters – amidst all the euphoria, and he was motivating the others to keep going – only then did I learn he was so involved.”

David Krčmář remembered the spirit of camaraderie engendered by these protests, which began when 800 people assembled in Teplice on 11 November:

“He had one big wish and that was for Václav Havel to come to Teplice. Unfortunately, that didn’t happen...Overall, events were a little chaotic. Both the police and the demonstrators did not know exactly what they were supposed to do. But the atmosphere was perfect. Everyone was in this thing together. And then in the subsequent demonstrations, the police interventions unfortunately were far harsher.” 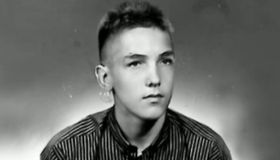 Zbyšek Jindra, photo: Czech Television On November 13, the atmosphere grew tense as protesters were pushed out of Teplice’s main square. Instead, they shifted in front of the local communist party headquarters. Ultimately, local communist official Antonín Váňa gave way and promised a public debate the following week. But that was to be overtaken by events in Prague. The rest, as they say, is history...