Exactly 20 years have passed since officials in Czechoslovakia disbanded the notorious Communist-era secret police the StB. The order came on January 31, 1990 from then interior minister Richard Sacher; within 15 days some 13,000 StB officers had handed in their weapons and their badges. 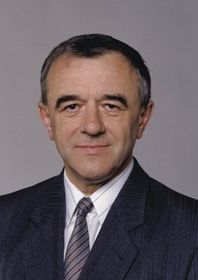 Richard Sacher, photo: ČTK It has been twenty years since former Interior Minister Richard Sacher gave the order disbanding the StB, the country’s secret police, which thankfully for most had no future in the new Czechoslovakia. In the uncertain days following the Velvet Revolution, there were reportedly discussions among the ranks of the StB, long the arm of Communist oppression,– to reform itself within the emerging democracy, but Richard Sacher cut any such speculation far short. As of the 31st of January, 1990, members of the secret police were ordered to hand-in their personal firearms and ID. Within 15 days, the disbanding was complete. The move, which most largely impacted members of the then Counter-Intelligence, followed an earlier decision on January 12, for the StB to immediately desist from any activities against Czechoslovak citizens.

But the disbanding was not without real worries, at least one daily has recalled on the 20th anniversary: the Interior Minister, Mladá fronta Dnes noted, was heavily guarded by personal bodyguards following the decision and even spent two days at a prison facility for security reasons, after having received death threats and after an unknown assailant also reportedly fired on his car. Meanwhile, there were rumours of members meeting in secret in the area of Jihlava, which proved unfounded.

Czech TV recalled the event on Sunday, airing an original report from February 1990:

After 1992, the former interior minister became a member of the supervisory board for the security agency G4S Security services. As for former members of the StB? Some, namely those not involved in acts against Czechoslovak citizens, were able to remain with the police or even in the intelligence services. Many others with proven dubious past records were forced out, either into retirement or left to look for work in the private sector. Twenty years later their legacy – one of legally terrorising Czechs and Slovaks opposed to the regime – remains one of the ugliest chapters in Czechoslovak history.