20 years after, Václav Havel seen as key figure in transition to democracy

In a memorable moment of history, dissent and playwright Václav Havel was elected the first post-communist president of Czechoslovakia 20 years ago. His inauguration put the final seal on the country’s road to democracy. Two decades later, most Czechs believe Mr Havel’s role in the process was crucial.

Václav Havel took the presidential oath in the Vladislav Hall of Prague Castle on December 29, 1989, shortly after the communist Parliament elected him the 10th president of Czechoslovakia. Less than two months after the Velvet Revolution overthrew communism in the country, Václav Havel’s election signalled that the transition to democracy was irreversible. Political analyst, and former advisor to Václav Havel, Jiří Pehe says Mr Havel’s election as the country’s first post-communist president was loaded with symbolism. 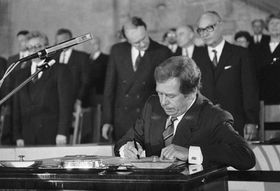 Václav Havel’s inauguration, photo: CTK “I think it was a very important event, and a very symbolic one, too. Mr Havel was a symbol of the anti-communist movement in Czechoslovakia, and from that point of view, his election was perhaps the most symbolic gesture one could make if you consider that just months before his election, he was still in prison.”

In a matter of days, President Václav Havel gained overwhelming popularity around the country. A lot of it stemmed from the sharp contrast between the nondescript communist functionaries and the charismatic personality of the new president. Actress and former personal secretary to Mr Havel, Bára Štěpánová told Czech TV how the new president came to ride a scooter around Prague Castle in his first days in office.

“We were all wondering what it looked like up at the castle, what went on there, and so on. In early January 1990, I asked one of Václav Havel’s aides, and he told me, ‘it’s mad, nothing works. There are no phones, there are really long corridors and we have to run everywhere like madmen’. We managed to get a scooter, which was really difficult, a nice wooden scooter, and we officially presented to Mr President, so that he could ride it along the long corridors.”

To mark the anniversary, Czech TV is showing on Tuesday a new documentary entitled Václav Havel, Prague – Castle. The film describes the first few months of Mr Havel’s term in office from his inauguration to the first democratic general elections the country saw in more than 40 years. Based on interviews with presidential advisors, aides and other personalities, it also features several of world’s leaders of the time including former US president George W.H. Bush.

“My impression then was like my impression now. He’s a modest and humble man, a man of great accomplishment. I was amazed that he was so quiet, so down-to-earth, you might say, not caught up in all the fame, and he was wonderful. I don’t think there were any practical problems – you can talk to him like a human being. I wasn’t aware of all these sidebars, about his political problems and all that. I mean I knew about the background, but he was just so human and so down-to-earth that he was very easy to talk to about all kinds of problems.”

As it happened, Václav Havel was also the last president of Czechoslovakia, having resigned several months before the split of the country in January 1993. Later that year, he became the first president of the Czech Republic, an office he held until 2003 when he was succeeded by Václav Klaus. 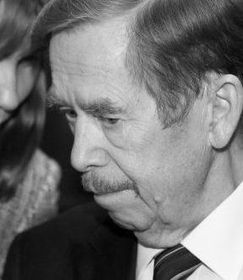 Václav Havel Mr Havel’s popularity at home waxed and waned during his years in office, but according to a survey published on Monday, 71 percent of Czechs today appreciate his contribution to the Czech Republic, more than that of any other politician. Jiří Pehe believes that with hindsight Czechs realize just how much Václav Havel did for the country.

“Despite his mistakes, he was a rather successful politician. He was able to project certain idealistic, ethical and moral views, and he was a key figure in the transition to democracy. From this point of view, I think he will be remembered as one of the most important figures of Czech history in the 20th century.”