The wheels of Czech justice are famously slow to turn, with court cases dragging on for what seems like – and often is – years. But how about this one for size: in the early days of the Velvet Revolution, in November 1989, three students of architecture described their Communist professor as an arrogant careerist and demagogue. He later demanded an apology, and took them to court. Twenty years on, and the case is still unresolved. 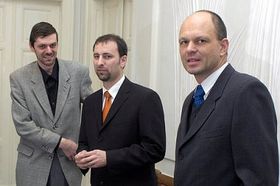 Jiří Slezák, Zdeněk Hirnšal, Martin Laštovička (left to right), photo: CTK It’s a journalist cliché to say that twenty years since the fall of communism, Czechs are still coming to terms with the legacy of the old regime. But in the case of three former students of architecture - Jiří Slezák, Martin Laštovička and Zdeněk Hirnšal – and their former professor at the Brno University of Technology Jan Snášel, this is literally true.

The case dates back to the heady days of November 1989, when students all over the country began to hold impromptu strikes in protest at the communist regime. The three, as members of the student strike committee, put up a notice accusing their teacher of “demagogic, arrogant and careerist” behaviour. Mr Snášel was the head of the local Communist Party cell and was actively opposing the pro-democracy protests. The regime fell, and he was later forced to leave the school.

However Mr Snášel took full advantage of his newly enshrined democratic rights, and in 1991 he took the students to court for defamation of character, and demanded an apology. They refused.

Jan Snášel and his son are now in business together, and the son had claimed the case was damaging their commercial reputation. The Constitutional Court rejected the complaint, pointing out that the son was 10 in 1989, and so hardly relevant. The lower court will now resume hearing the case.

No case has dragged on for so long in the Czech courts, famous for their snail’s pace. The European Court of Human Rights in Strasbourg has already compensated the three students for the excessive delay in resolving the matter.