This Saturday marks one hundred years since William Frederick Cody - more famously known as Buffalo Bill - first visited Moravia with his famous "Wild West" touring extravaganza. In his day the show, which featured numerous performers enacting scenes from the American wilderness, made Cody one of the most recognisable men on Earth, and even now the legacy of the famous rider, army scout, and trapper continues to attract countless fans. The Znojmo region in the Czech Republic even boasts a "Buffalo Bill Museum" opened last year on a ranch there known as "City of Rolftown", founded by the late Rudolf Stanek, sr.

In honour of Buffalo Bill's last European tour 100 years ago, the site recently performed homage to the Wild West. Speaking to Radio Prague Rudolf Stanek, jr described what was on view:

"Of course, we couldn't have anywhere near as many riders as Bill originally had, but we did get a few people dressed up as cowboys and Indians to show what Buffalo Bill's arrival on horseback must have been like. There were demonstrations of stunts and weapons from the Wild West. Buffalo Bill was played by performer Zdenek Gatak, world champion in western-style shooting, who has - for years had a dedicated interest in the Wild West, especially in Buffalo Bill." 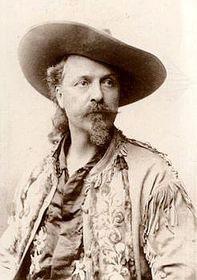 Buffalo Bill Back in 1906, 100 years ago Saturday, Buffalo Bill visited Moravia in what was then the Austro-Hungarian empire and stayed for about a week, performing in the towns of Cesky Tesin, Ostrava, Prerov, and Brno, as well as Jihlava. According to sources, his show was greeted with enthusiasm by thousands, although he apparently got into hot water in Prerov where, the story goes, he was almost lynched by the crowds for addressing visitors in German. Otherwise, though, his shows were an overwhelming success and must have been exciting. Sources say when "Wild West" came to town Buffalo Bill sent some 100 hundred riders ahead to re-enact battles between cowboys and Indians on the run. Once again, Rudolf Stanek jr: 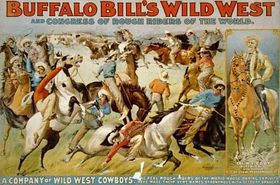 "His success I think is well documented on a beautiful period poster period written in Czech in the language of the day, describing the 'Wild West' show. It reads: 'One day in Jihlava only! At the army training-camp... Buffalo Bill & the Wild West, one last time, never to return. Three train cars, five hundred horses, eight hundred performers, one hundred Redskins, a group of Japanese Samurai warriors'. It goes on. The show must have been enormous and was no doubt a success."