The Czech Republic popular - and cheap - for foreign film makers

On Thursday, an American stuntman was killed during the filming of a Hollywood movie called Triple X in Prague. In recent years, locations in Prague and the Czech Republic as a whole have become immensely popular with film crews from Western countries. Alena Skodova has more: 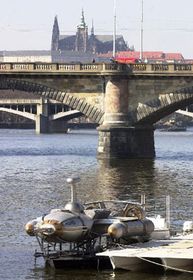 Palacky bridge, photo CTKPrague is naturally one of the most attractive locations for film-makers. However, they often block important streets in the city - pedestrians are restricted and public transport has to be re-routed. And the film companies pay the Prague authorities surprisingly little - when they take over city streets they only pay 10 crowns - that's around 30 cents - per square metre per day. Although many Prague residents might be pleased that their city is in such high demand from foreign film crews, others resent the disruption location shooting can bring. People cannot park where they normally do and some historical places in Prague are closed to tourists. The stuntman killed in the accident on Thursday was working on a new American blockbuster called "Triple X", which features a race between a mini-submarine in the Vltava river and a car driving down the embankment. The accident took place during filming around the Palacky bridge near the centre of Prague. Three weeks ago the Old Town Bridge tower was closed to visitors and last week tourists were kept back from Hradcany Square while another film was shot.

A new TV remake of Pasternak's Doctor Zhivago, expected to be aired on the Britain's ITV at the end of the year, is currently being shot some 20 kilometres north of Prague, after the major scenes were filmed in the Moravian city of Olomouc. I asked the producer, Hugh Warren, why his film crew decided to make the film in the Czech Republic?

"Primarily because of the location, it's a Russian story obviously, and we wanted both landscape and streetscapes that we felt were believable as Russia of that period. We looked to various countries, we went to Romania, Russia, we looked what we could do in England and in Canada, because the other factor is snow, so we had to go somewhere where we could find snow. But additionally, Prague has a very good film industry and a very good infrastructure and very experienced technicians and so on, so it's very easy to come here and make very good facilities here and have a very good, experienced personnel.

What about the financial aspect of the whole venture, is the Czech Republic advantageous from this point of view?

"Yes, there are advantages, in least of all because we don't have to build massive sets, we're not building any big sets, so if we had to try and reproduce the locations we are using here, even interior locations, in England, that would be enormously expensive. So it's obviously from that point a lot cheaper to come here. Also because of the exchange rate, you know Prague is - compared to London - relatively cheap, labour and material are also cheaper than in England, so there are definitely financial advantages."

And do you use Czech extras?

"Absolutely, we use them exclusively, we use Czech extras for the whole time we're in the Czech Republic, and we did the same in Slovakia, we always use local people there."