The dispute over the post-war expulsion of two and a half million ethnic Germans from Czechoslovakia was reinvigorated on Sunday, after the head of the Landsmannschaft - the largest organisation representing Sudeten Germans - appeared on a Czech TV discussion programme. Landsmannschaft chairman Bernt Posselt confirmed that plans were underfoot to open an office in Prague, a delicate announcement given the simmering dispute over the post-war expulsion and possible compensation. Earlier my colleague Rob Cameron spoke to the BBC's Petr Brod, a Czech journalist who has spent many years in Germany, and he began by asking him what the majority of Sudeten Germans really wanted from the Czech government. 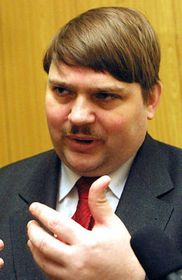 Bernd Posselt, photo CTK Well as you say the largest one, the Landsmannschaft, the head of that organisation, Bernt Posselt, said at the weekend that there were plans to open an office in Prague. Seeing as there has been so much rhetoric recently, and that the dispute over the Benes decrees has reared its ugly head once again, do you think it was the right time to make that announcement?

"It's not really a new announcement. It's one in a series of announcements that have been spread over the last three years or so. The Landsmannschaft has been saying that it intends to open a representation in Prague for such a long time that I really wonder whether they are really going to go ahead with it now. And I think one of their concerns is about security, which I understand, because that representation, when it happens, will be opened in a rather hostile environment."

Indeed. Of course Mr Posselt also issued an apology for the sins of the Nazi regime. Do you think that apology will be enough to satisfy his critics in the Czech Republic?

"I don't think so. And it was immediately visible in the reactions of the Czech politicians that Czech Television interviewed during the lengthy conversation with Bernt Posselt. I think those reactions were fairly representative of the general public view."

The BBC's Petr Brod, speaking there to my colleague Rob Cameron on the lingering dispute over the post-war expulsion of Czechoslovakia's Sudeten Germans.

With the 80th anniversary of the Munich agreement coming soon, Tom McEnchroe focused on the Czech side of Munich. Talking to the deputy director…