Czechs will be asked in June whether they want to see their country become part of the European Union. In the meantime all the chapters in accession talks have been closed and the Czech Republic has appointed its first envoy to Brussels. He is Pavel Telicka - the former chief negotiator - who told us what he thought about the accession talks. Katya Zapletnyuk reports. 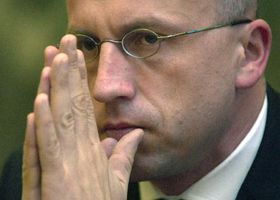 Pavel Telicka, photo: CTK Mr. Telicka has been involved in the Czech Republic's accession talks for eight years. I asked him what he found to be the most difficult part of the accession process.

"If I want to answer your question without hesitation and giving it a second thought I would probably be tempted to say that the more difficult part of it was really the domestic part. The one when we were preparing negotiating positions -- discussing, quarrelling, arguing battling sometimes with line ministries, with ministers, with different interest groups, with certain political entities."

Mr. Telicka says that areas like taxation, environment and the final round of talks on budget provisions were the most difficult issues. But what made negotiations back home so hard? - according to Mr. Telicka it was the number of lobby groups involved and the insufficient level of knowledge of European affairs.

"It was really the quantity, the number of players that you had to talk to that you had to work with and so on and I think that of course internally the level of knowledge of these issues the mechanisms, about how the union functions about what is feasible, what is not. I think that was difficult sometimes to convince the domestic players as not everyone had maybe the sufficient level of knowledge about the European Union's affairs."

Mr. Telicka was the chief negotiator under three Czech governments. He declines to make any direct comparisons of the three governments' approach to the talks but says that consistency was a great advantage to the Czech Republic in the negotiations.

"I would say that one of the basic pillars of our strategy in the accession talks was really consistency. It was the honesty in defining our negotiating positions, argumentation, thorough negotiating work on a daily basis and then consistency. I don't remember when the Czech Republic even thought of opening a certain chapter that has been already agreed upon, unlike some other candidate countries, which means that first of all the positions were honestly defined and secondly we in the majority of cases managed to reach an acceptable result."

The Czech government and Mr. Telicka's team of negotiators knew they had only one chance to negotiate the best deal possible. Only the future will show whether they chose the right approach.

"Surely after some time we will learn that something could have been done better because we will be told by our counterpart: do you remember that issue when we negotiated? We were ready to do that if you had done that and we will learn."

Now the Czech government has to make sure that after years of preparation the Czech people vote yes to membership in June's referendum. So far a yes vote seems likely.