Czech moves to fill skills shortages by recruiting willing Ukrainians have not panned out as the pilot project probably counted on. 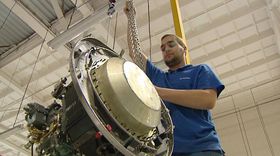 Photo: Czech Television Fiasco, that’s how the daily Dnes curtly summed up the state of Czech attempts to temp skilled Ukrainians to the country to fill the current gaps in the jobs market. Sixty-nine Ukrainian recruits from the pilot programme is the result so far following applications from 46 Czech companies to take part. However those figures are spun, the government was clearly expecting more success when it set the annual quota of recruits at 500.

In response, the government has relaxed some of the hiring requirements for the foreign recruits, specifically the minimum wage that employees would have to promise. That was previously set at 38,000 crowns but now must only match the average wage for the region where the employer is based.

And the target is to widen the programme to the health sector given the severe labour shortages in hospitals across the Czech Republic and fact that some of the Slovaks who have hitherto helped paper over problems there might now be tempted back home by the Slovak government’s attempts to sort out its rather sorry healthcare provision.

Czech employers have hardly been backward in their criticism of the programme. They pinpoint a basic flaw being the fact that it was targeted at university graduates when the real skills shortage was somewhere else – technicians, engineers, electricians, welders, and other craftsman who simply cannot be found locally and cannot be trained in a hurry. And moves to widen the programme to target this key group have failed to win approval from the government so far.

There has also been criticism of the delays and red tape at the Czech end of the recruitment process at consulates and the embassy in Ukraine. The Ministry of Foreign Affairs told the paper that it had boosted its staff at the Lvov consulate and as a result 5,000 more residence permits could be processed a year.

There are currently just over 47,000 Ukrainians officially working in the Czech Republic according to figures from the state Labour Office, many thousands, perhaps tens of thousands could be added to that figure from the ranks of those working unofficially in the black or grey economy.

The whole recruitment programme has also been eyed with a lot of suspicion by the biggest grouping of Czech trades unions, the Czech and Moravian Confederation of Trades Unions. It argues that a basic problem in the current Czech skills shortage is the fact that local employers are not willing to pay the rates for the job or train workers up so that they can fill the vacancies.