Czech President Miloš Zeman’s trip to China appeared at risk with the ongoing government crisis; nevertheless, the head of state departed Thursday with a delegation of more than 80 business leaders and officials such as the head of the Škoda Auto and the governor of the Czech National Bank. The delegation will be in China for just under a week. 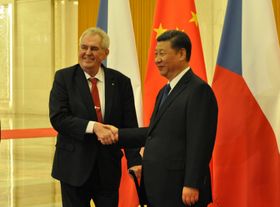 Miloš Zeman, Xi Jinping, photo: CTK Two planes serving the delegation as well as the head of state departed for China on Thursday from Prague for a week which business figures hope will be fruitful in deepening or forging new commercial ties and cooperation. President Miloš Zeman has sought deeper economic ties with China since day one of his presidency and the potential for broader cooperation with Chinese firms has largely still gone untapped.

Members of the latest delegation include the head of the Mladá Boleslav-based car manufacturer Škoda Auto, Bernard Maier, who, a spokesperson confirmed would accompany Mr Zeman in a meeting with Chinese President Xi Jinping. Another to take part in that meeting, although not officially confirmed, was the Czech Republic’s richest businessman, the majority owner of the PPF Group, Petr Kellner. Jiří Rusnok, the head of the National Bank, which recently granted China’s largest bank, ICBC, a license to open its first branch in the Czech Republic is also there. Others to be present at bilateral talks, the financial daily Hospodářské noviny wrote, include the head of J&T Patrik Tkáč.

China is of significant strategic importance for both Mr Kellner and Škoda Auto, the former because of his majority stake in consumer loans firm Home Credit, which has more than 7,000 clients there, while Škoda Auto sells more than 300,000 cars per year in China and has five factories in the country. Part of the programme will include a meeting with Chinese footballers (Pavel Nedvěd, vice president of Juventus Turin, vice-chairman of the club’s board of directors was reportedly also to be part of the delegation but in the end was not, according to iHned). Others in the delegation include former prime minister Petr Nečas and the CEO of Travel Service Roman Vik.