Plans to build two more reactors at the Temelin nuclear power plant in south Bohemia are looking increasingly unlikely be realized. Incoming prime minister Bohuslav Sobotka said in an interview this week that his government would not offer guarantees on the purchase price of electricity from the new reactors which alone would make the estimated $15 billion project economically feasible. 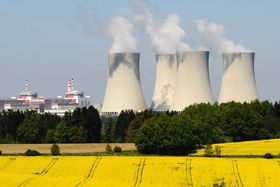 Temelín nuclear power plant, photo: Filip Jandourek Sobotka says he’s not willing to go along with plans to copy the British model for building new nuclear reactors, the so-called contract for difference, because it would put too big a burden on Czech electricity consumers. He said his government would seek other ways to support the construction of new units at Temelin and that investment models in other countries might provide the answer. CEZ, the state-owned power utility which runs the plant, has been stalling on a final decision whether to go ahead with the massive construction project and has it is not ready to commit without state guarantees on electricity prices. These are likely to be around double the current wholesale price for electricity with the burden either falling directly on the state or shouldered by consumers.

Jan Mladek, slated to be country’s next industry minister, has likewise said he cannot envisage approving the expansion without such high price guarantees. He did, however, describe the Temelin expansion as a classic investment which would fit in with the proposed government’s plans of boosting Czech economic growth.

The outcome to the Temelin saga is likely to come later rather than sooner. The new centre-left government is slated to still decide on the country’s new long- term energy strategy, and according to the prime minister in waiting is not under any pressure to make a quick decision.

CEZ has now postponed a final decision on the plant until mid 2015 and company officials have noted that even if they sign a contract with a supplier to build the reactors the company still has a four-year-window during which it can back out of the agreement with minimal financial losses.

Electricity prices have fallen in the last years amid low European demand and the obligation to use electricity from renewable sources. So CEZ fears the project might not make economic sense. Green groups opposed to nuclear power argue that new nuclear capacity is not needed in the Czech Republic because it is already a major exporter of electricity.

The two companies vying for the Temelin contract, Westinghouse Electric LLC and a Russian-Czech consortium led by Rosatom submitted final updates to their binding bids in December, but they appear no nearer to winning the final contract. In sharp contrast to these gloomy outlooks for Temelin’s expansion, is the sound of wedding bells in the shade of its cooling towers. A PR stunt launched by the company in 2006 has taken off and some couples, who apparently firmly believe in the future of nuclear power, choose to take their wedding vows at this unusual location.

Czech power giant ČEZ says there’s no reason why its Temelín nuclear reactor can’t operate for 60 years or more. That’s one way to…