The Czech company Tatra Trucks will supply 328 chassis for military vehicles in a deal worth more than CZK 1 billion, the Kopřivnice based manufacturer announced in a press release on Friday. The company says that the deal, its largest this so far this year, could be developer further. 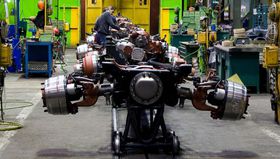 Photo: Tatra Trucks Specifically, Tatra will be sending modifications of the Tatra Force 4x4 model onto which a local partner will then install special military parts according to customer requests.

It is not the first time that Tatra has supplied Jordan with automobile chassis. Last year the manufacturer sent almost 150 to the Middle Eastern kingdom.

Tatra is also working with Jordanian partners on developing undercarriages and hopes that this will lead to further business.

Apart from Jordan, Tatra announced earlier this year that it will also be supplying 56 undercarriages to Brazil, 29 to the Turkish army and 12 fire engines into Israel.

The heavy-automobile producer has also sealed deals within the Czech Republic. The Defence Ministry has purchased 31 heavy trucks in a deal worth around CZK 500 million and it seems that Tatra will also take part in the production of 62 Titus armoured vehicles.

Tatra plans to produce up to 1,100 machines and expects sales to outdo production by about 100 vehicles. Last year, the manufacturer, which employs over 1,000 people, produced 790 vehicles. The majority owner of Tatra Trucks is defence industry focused holding Czechoslovak Group.