Czechs are buying up property in the country’s mountain regions, with special interest being placed on historic log-houses and flats near ski resorts. These recreational locations are also getting more expensive, with local property prices rising by half in the past four years, Czech Radio reports. 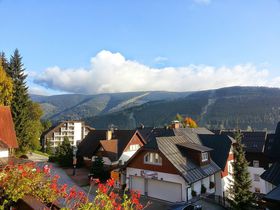 Špindlerův Mlýn, photo: Ossi O CC BY-SA 3.0 The most common buyers are Czechs, says Renata Lichtenegerová, the manager of the country wide real-estate firm M&M Reality. However, Germans and Dutch citizens also often look for local ski-resort properties, she says. František Brož, her counterpart from the real-estate website Bezrealitky.cz, says that owners post hundreds of mountain properties, with the most attractive ones taken in a matter of days.

The most expensive housing on the market can be found in what are also the country’s most popular mountains for skiing – the Krkonoše mountains located in the north. There, a well-placed apartment can range at over CZK 100,000 per square metre.

In the Krkonoše’s famous Špindlerův Mlýn resort, the local Information Centre owner, Martin Jandura, says that many hotels are now selling apartment flats, sometimes halving their capacity in the process.

However, according to the town’s mayor Vladimír Staruch, this has a bad impact on tourism, as the new owners only travel to their treasured residences occasionally.

“Because of this, the number of services offered also decreases. They only operate short time and not all the services can be maintained in the city.”

The price rise in mountain resort properties is noticeable across the country.

For example, a 90 square meter mountain hut which sold for CZK 700,000 five years ago, now sells for CZK 2 million.

Locals are often outpriced by the sharp increase, which leads to depopulation as they search for housing in non-tourist locations.

According to the head of the Association of Mountain Resorts Libor Knot, this has an impact on communal life in the neighbourhood as well.

“A phenomenon of ‘cold beds’ arises, from which the village basically has nothing. Locals still have to take care of them in the form of garbage collection, roads maintenance, sewage treatment plants and so on.

“Meanwhile, those who own the property do not participate in local life. They do not go to kindergarten, to school, or shopping.”

Ex-central bank chief: Czechia had a good 2019 but needs to build infrastructure, housing

The Czech economy grew at a healthy pace, the country’s unemployment rate is at the lowest in decades, wage growth remained solid and…