Private train and bus operator Leo Express saw its number of passengers rise by close to a third in 2016, CEO Peter Köhler confirmed; however, according to preliminary results the company still remained in the red due to vehicle write-offs, interest payments and further investment and company development. 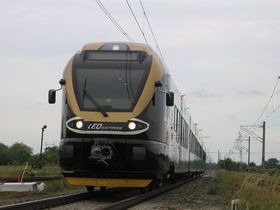 Photo: PetrS., CC BY-SA 3.0 In 2016, Leo Express, connecting some 30 towns and cities in the Czech Republic, served 1.4 million clients, a rise of about one-third year-on-year, the Czech News Agency reported. According to preliminary results, the company saw revenues of 340 million crowns, a rise of around 40 percent year-on-year. A clear boost were new lines from Prague to Munich, Warsaw and Lvov.

An increase in the number of passengers and sales was also boosted by acquisition of TigerExpress, providing micro bus transit on lines between numerous Polish towns as well as Bratislava and Vienna. Because of expenses, including investment and development and interest, as well as operational costs, the provider will still see losses for 2016, although the exact number has not been specified yet. In 2015, the firm, for example, finished with losses of 67 million crowns.