Last week saw shares on the Prague Stock Exchange fall by 10 percent, with index levels at their lowest since June 2017. Analysts say this is part of an international trend with shareholders worried about the impact of the coronavirus. 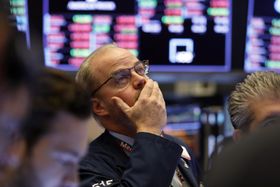 New York Stock Exchange, photo: ČTK/AP/Richard Drew Stock price fluctuations on the Prague Stock Exchange have usually been in the tenths of a percentile point in recent years. However, just last week saw three days when shares fell by more than 2 percent.

Analysts are highlighting that the sharp falls are part of an international trend and do not see a clear end to the financial uncertainty any time soon.

„We are experiencing the worst week on the markets since the outbreak of the world economic crisis in 2008. More than USD 5,000 billion have disappeared from international markets“, BHS Chief Economist Štěpán Křeček wrote last week.

He went on to warn that Italy could enter a recession due to the coronavirus outbreak, which could in turn lead the highly indebted state into financial insolvency and a domino effect that would ruin the European Union’s economy.

J&T Bank analyst Milan Vaníček likened the effects of the coronavirus on international markets at the end of February to the black swan effect.

“Economists are warning of the possibility of a recession in Europe. Share indexes have gone through a marked correction. Specifically the S&P 500 went down by 13.7 percent in a week, and the EuroStoxx 600 fell by 12.6 percent. The domestic PX followed this trend on the Western Markets.”

The only shares on the Prague Stock Exchange that registered growth were those of Czech anti-virus giant Avast, which went up by 1.72 percent.

Meanwhile, the sharpest decline was registered in the shares of telecom operator O2, whose share prices went down by 5.78 percent.

Those of the Central European media group CME, whose acquisition by the investment fund of Czech billionaire Petr Kellner PPF was given the green light by shareholders last week, saw the lowest decrease by 3.7 percent.

Investors are now figuring out the possible scenarios in which the spread of the coronavirus could have further economic effects.

“We continue to be very careful going into next week and we expect that especially artificial intelligence could move the markets further down”, Mr Vaníček told the Czech News Agency.