The runners have declared themselves but the race is still very much up in the air. That, more or less, sums up the situation surrounding Czech moves to build new nuclear power reactors to replace current capacity and boost contribution nuclear power makes to the overall production mix. 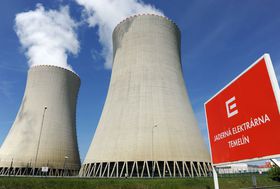 The end of October was the deadline for the companies and group to send in technical details of the reactor they would probably be offering. Details were submitted earlier of the financial and commercial conditions under which the companies could take part in the Czech project, for instance taking a share stake in the separate companies that will plan and build the proposed new reactor or reactors at the current sites at Dukovany and Temelín.

Bosses of Rusatom Overseas taking part in a three-day conference in Prague from Sunday, have said they will offer their complete range of partnership options to the Czech government and state-controlled power company ČEZ. These range from just building and delivering the new reactor to the Finnish–type model, where the Russian company owns a third of the overall project.

Already in the previous head to head with Westinghouse for the previous Temelín expansion tender, eventually cancelled by ČEZ when the government refused to give guarantees over electricity prices from the two new reactors, Rusatom look like they will retreat from the offer of placing 70 percent of value of the reactor contract with Czech companies. One of the factors there is the ongoing problems of the Vítkovice engineering group.

Rusatom has just expressed interest in what appears to be the Czech priority project of building a new reactor at the Dukovany site by 2035, the date at which the existing four reactors are likely to be phased out. The government’s aim is that nuclear activities should continue at the central Bohemian site so that the skilled work force will not be dispersed and the existing infrastructure wasted.

Czech nuclear ambitions are still somewhat vague according to the action plan adopted by the government in June 2015. Officially, the plan calls for construction of two reactors, one each at Dukovany and Temelín, with another two to possibly follow. While most industry experts believe one or two new reactors might be possible, most do not believe the Czech Republic can push ahead with plans for four reactors.

ČEZ, which should pilot the nuclear expansion project, already set up separate companies for the Dukovany and Temelín expansion by the start of October. Managers are warning though that 22 years is the likely timeline for the first reactor to be built and that means that hopes of getting the new plant operational by 2035 are already looking too ambitious.