Tuesday's vote against Prime Minister Theresa May's Brexit deal has raised fresh concern in the Czech Republic regarding the uncertainty that lies ahead and the possibility of a “hard” Brexit. According to the leading Czech business daily Hospodářské noviny a “hard” Bexit would result in a drop in direct and indirect Czech exports to Britain and the loss of an estimated 40 thousand jobs on the home market. 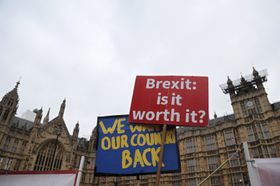 Photo: ČTK/AP/Frank Augstein Exports to Great Britain are actually more than 50 percent higher than official figures suggest, due to indirect exports to the country worth some 210 billion crowns, according to David Navrátil, chief economist at the country’s leading financial institution, Česká Spořitelna. This concerns among others, exports of car parts to Germany from where the end product is exported to Great Britain. Česká Spořitelna recently released an estimate according to which Czech exports to Great Britain would drop by a fifth in the event of a “”hard” Brexit and could put some 40 thousand people out of a job on the home market.

This would amount to a drop in GDP by around one percentage point, the bank’s chief economist told the daily. However even a “hard” Brexit would not necessarily send the Czech economy into recession, he added. The firms that need to prepare above all for such a possibility are those in the automobile and electro-technical field, according to the chief economist at Raiffeisenbank Helena Horská.

According to business experts Czech firms are not adequately prepared for the possibility of a “hard” Brexit, not just because of the uncertainty surrounding Brexit, but because of the high costs this would involve and the limited possibilities of doing so.

Chief economist at Patria Finance, Jan Bureš, says the impacts of a “hard” Brexit are difficult to predict because of the lack of previous experience in an unregulated disintegration of economic ties among closely bound partner states. There would definitely be a drop in investments in both directions, and British firms have been significant investors in the Czech Republic, he notes.

Czech exports to Great Britain peaked in 2016, then reaching something over 208 billion crowns, after which they stagnated due to concerns over Brexit.