Czech prime minister intervenes in dispute over wages at Ahold

Prime Minister Bohuslav Sobotka has raised eyebrows by entering into a dispute over wages between trade unions and the Dutch retailer Ahold which owns the Albert supermarket chain in the Czech Republic. The prime minister took the unusual step of discussing the issue with the Dutch ambassador to Prague, whom he asked to intervene on behalf of Czech employees. 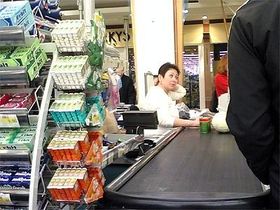 Illustrative photo: Jan Rosenauer Albert employees currently get salaries that average about 12,500 crowns a month – which is just half the average wage in the Czech Republic. Trade unions who have unsuccessfully fought to secure a significant raise have now got an unexpected ally in their corner. Prime Minister Bohuslav Sobotka publicly criticized the fact that international companies with big turn-overs have little to spare for their Czech employees.

“Ahold and other international companies generate big turnover and profits in the Czech Republic and pay out big dividends to their owners. But a very small amount of money is left here for our employees.”

To bring the message home Mr. Sobotka met with the Dutch Ambassador to Prague Eduard Hoeks asking him to inform his government and the management of Royal Ahold Delhaize NV about workers’ earnings at outlets run by the retailer. Ahold has offered to raise salaries by 8.5 percent next year and another 7 percent the year after, but trade unions are demanding a one-off 1,000 crown bonus this year as a top-up of extremely low salaries. According to Ahold salaries went up by 11 percent this year but trade unions insist it was only three percent. They have moreover slammed the employer for trying to “fob off” Czech employees with a 300 crown Christmas bonus – the equivalent of 11 euros – which they say will not even buy them a Christmas dinner.

The battle over wages continues, but the prime minister’s intervention has raised eyebrows and elicited critical comments. The Civic Democrats point out that the Dutch ambassador has no means of influencing wages the retailer pays employees and accuse the prime minister of trying to raise his party’s support rating ahead of next year’s general elections. Even former trade union boss Jaroslav Zavadil is sceptical about the outcome of the prime minister’s intervention, saying that if anyone was to have intervened, it should have been the head of the Czech Chamber of Commerce Vladimir Dlouhy. However, he adds that since Albert employees make on average five to six thousand crowns a month less than employees of other supermarket chains in the country the demand for higher wages is perfectly legitimate.