GPs, outpatient specialists and dentists around the country held a symbolic nationwide protest on Tuesday against inadequate financing and excessive bureaucracy that is driving many of them out of business. They warned that the symbolic protest would be followed by a one day strike if the government fails to pay heed. 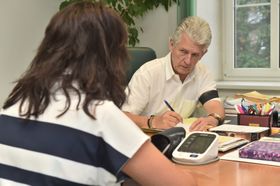 Photo: CTK Thousands of doctors around the country donned black armbands on Tuesday to highlight the plight of GPs, specialists and dentists in private practice. They claim that the health ministry has been neglecting their needs in favour of hospitals where doctors work in better conditions and say that inadequate financing and excessive bureaucracy is driving many of them out of business. They are heading into retirement, seeking work in hospitals or lucrative positions abroad. And in some of the smaller towns and villages they are leaving people without medical care.

In the town of Žleby, with 1,300 inhabitants, doctors staged a mock funeral –a symbolic farewell to the private practice that is closing down next week. People from the town will now have to travel further afield to get medical care, which presents a big problem for the elderly.

Other small doctor’s offices around the country may follow suit. Hundreds of small doctors in private practice are considering closing their offices. They say excessive bureaucracy is stifling them and new regulations due to go into force soon will not be easy to meet. As of January 1st they will be bound to provide electronic prescriptions and as of March they will be expected to operate electronic cash registers. For many this has speeded up the decision to retire. Others are heading for hospitals. Tuesday’s protest is supported by the Czech Medical Chamber. Its spokesman Michal Sojka says the concerns of private practitioners are legitimate.

“We may face a further exodus of doctors and nurses in private practice next year. Conditions in hospitals are improving so the risk is there. But private practitioners are vitally needed.” 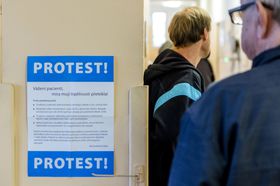 Photo: CTK According to the Union of Private Practitioners, the Czech Republic will lack around 800 medical specialists and general practitioners by the year 2020. The lack of GPs and medical specialists is already making itself felt in some areas of the country, especially the border regions and mayors are complaining that it is difficult to secure medical care for their inhabitants. People in these regions are forced to travel long-distances to receive medical care and are putting a heavier burden on doctors elsewhere whose offices are always overcrowded.

The Union of Private Practitioners says that unless things change for the better the whole network could collapse. It moreover points out that in supporting hospitals and neglecting small private practitioners the health ministry has been following the opposite trend of that in Western Europe where the authorities have recognized the importance of providing good and accessible outpatient care to the population.

And just in case the government failed to register the protest, doctors in private practice say they are ready to go on a one-day strike next week to bring their message home. 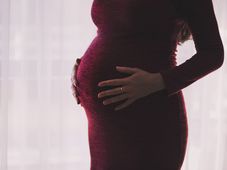