Czech car and vehicle production, accounting for just under 30 percent of the country’s total industrial production, is heading by the end of this year for the record figure of 1.3 million vehicles manufactured in the country. 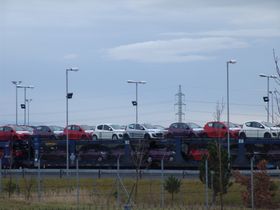 Photo: archive of Radio Prague And while there are signs for most manufacturers that the growth will continue into 2017, some, such as Kolín-based TPCA are already facing a downturn thanks to sharp competition at the bottom of the market. TPCA sees its production slipping in 2017 to 220,000 from this year’s 224,000 target.

And there are signs that the auto sector is already reaching the production ceiling. The business daily Hospodářské Noviny pointed out Friday that Hyundai’s Czech plant in now producing at full capacity on three shifts a day; the biggest car maker Škoda Auto is searching for another 100 workers; and while bus maker Iveco has a new production hall ready it must really wait until a 26-kilometre missing link in the D35 motorway is completed until it can take full advantage of the new facility.

Truckmaker Tatra, which last year was making three lorries a day with that figure now shooting up to more than seven, says that some of its suppliers are having a hard time keeping up with the demand, especially in view of the fact that annual truck production is seen rising from 1,300 this year to 1,700 in 2017.

And the situation could get even tighter with Jaguar Land Rover expected to start production of cars out of its new Slovak plant near Nitra from 2018. This week Toyota also announced plans to invest around 170 million euros in a new car engine plant in Poland. That step follows a similar move earlier in the tear by Mercedes. Many of Central Europe’s auto producers source the same local suppliers whether it comes to the basic raw materials or parts. It points out that the Czech joint venture car producer TPCA on average sources 2300 separate parts from 234 suppliers.

And the transport logistics for shipping the materials and parts could also start coming under pressure it can no longer cope with, the paper adds.

And there is the human factor as well. While Czech car makers are continuing to recruit – new investments last year resulted in around 4,500 jobs – the companies are also facing a downturn in thanks to demographic trends in the pool of workers that they can draw on.